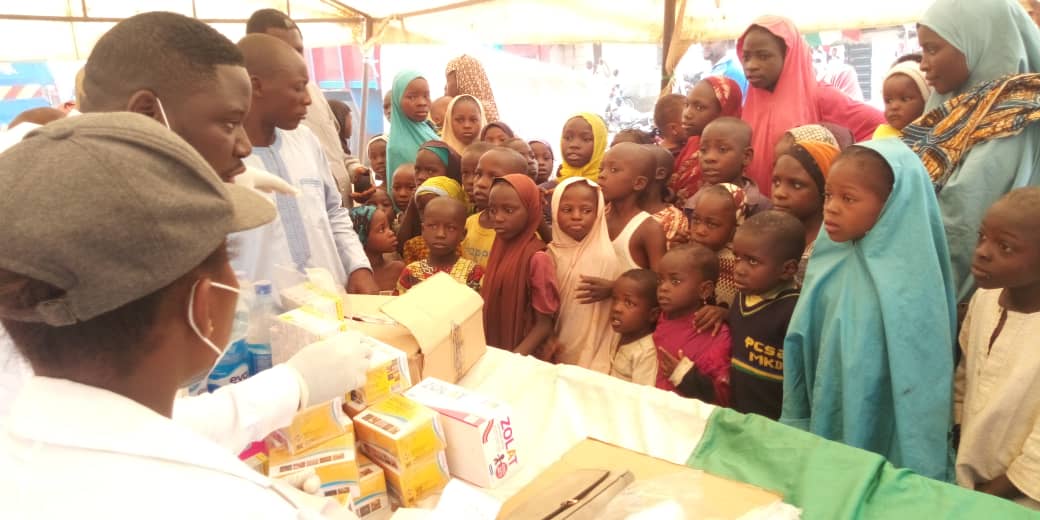 A group known as, “Samuel Ortom Re-election Actualization Initiative” says it is set to deworm over 20,000 children between the ages of 2 to 18 years in Benue state.

Th Group has therefore embarked on a deworming exercise at Wadata, a sub community in Makurdi town, near River Benue as take-off point, where they administered deworming drugs to the children accompanied by their mothers.

According to the Convener, Mr Abel Augustine Ochai, the deworming exercise was part of the group’s committment to reach out to the electorate and compliment efforts of Governor Samuel Ortom in improvng the health of Benue people.

Mr Ochai also said it is to ensure underage children living in riverines areas whose parents cannot access such medicare to be deformed.

“We are using this outreach to support the administration of Samuel Ortom to improve the wellbeing of the children so they live a healthier life and as well educate their parents and canvass support for the reelection of Governor Samuel Ortom.

Mr Ochai disclosed that the community outreach which began in Wadata Area of Makurdi will be replicated in communities around all river banks including Buruku, Katsina- Ala and Logo and Agatu local governments of the state.

According to him the outreach progromme is targeted at reaching over 4000 children within the age bracket in Makurdi alone and over 20,000 children in Benue as a whole.

Mr Ochai said the deworming exercise will help increase appetite of the children to feed well and also fight malnutrition to ensure their healthy living.

He commended Governor Samuel Ortom for his love on all the people in the state, assuring of the group’s committment in presenting the “true narrative” of the governor’s achievements in the last four years.

A volunteer with Samuel Ortom Re-election Actualization Initiative, Mr Ati Kenkeng explained that the exercise was beyond scoring a cheap political point, but an attempt to make sure the government of Ortom is felt even amongst the children in the state.

“We are here to deworm at least 4000 children in this riverine community of Wadata. The administration of Governor Samuel Ortom has always emphasized and demonstrated his commitment to ensuring a healthy society in Benue, So we are here to support his vision.

“We want the Benue public to feel the impact of the Ortom administration ahead of his 2019 reelection bid. By this exercise, we are sure of a healthier society especially the children who are the future of the state.

Reacting to the exercise, the District Head of Wadata, Mai Angwa Lawan Saad expressed happiness to the group for bringing such programme to the community and wished Ortom success in his second term bid.

Mai Angwa Saad who spoke in Hausa, however, appealed to the ‘Samuel Ortom Re-election Actualization Initiative’ to extend the deworming exercise to cover even people above the ages of 18.