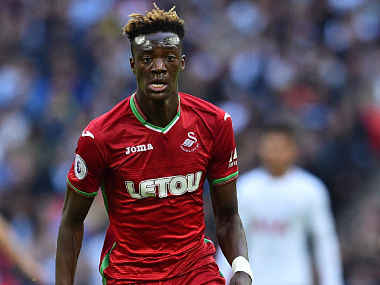 Nigerian Football Federation chief Amaju Pinnick said on Wednesday he has had “a positive meeting” with Tammy Abraham as he tries to persuade the England Under-21 starlet to switch allegiance to the Super Eagles.

Pinnick told AFP he had met with the striker, whose full name is Kevin Oghenetega Tamaraebi Bakumo-Abraham, and his father over the matter.

“I was with Tammy Abraham and his father in London last week and our meeting was positive,” Pinnick said.

“They have collected the forms and just the way we followed up with that of Ola Aina we would do same with Tammy.

“I can tell you that his parents are excited about the prospect of the young lad playing for Nigeria,” he said.

“But we have to be patient because we have seen with the case of Ola Aina that the process is not automatic.”

Nineteen-year-old forward Abraham, who is on loan from Chelsea to Swansea City, is one of the many British-born Nigerian players the NFF have been trying to persuade to switch allegiance to Nigeria.

He has featured for England Under-21s and made five appearances for Swansea in the Premier League this season, scoring one goal.

Defender Aina, currently on loan to Hull City from Chelsea, has represented England at youth level but was this month cleared by FIFA to play for Nigeria.