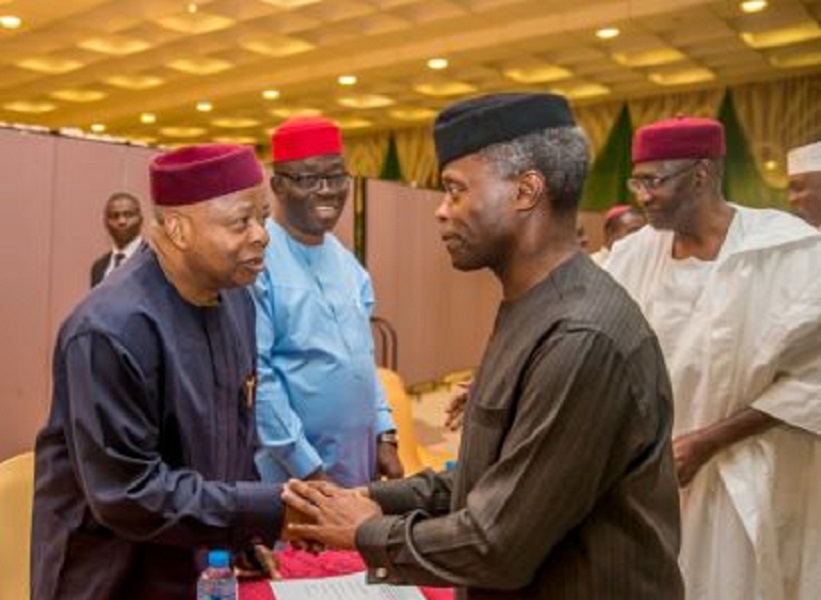 Acting President Yemi Osinbajo has expressed the need to urgently address recent agitations and proclamations coming from some parts of the country.
He said, “I firmly believe that we ought to address these agitations and proclamations urgently and decisively. Burying our heads in the sand and expecting the storm to blow over of their own accord is not an option.”
He spoke on Wednesday while holding consultation with elders and opinion leaders from the Southeastern Nigeria.
Again, Osinbajo reiterated the resolve of the federal government not to tolerate hate and decisive speeches from any part of the country.
According to him, “The reason why it (hate speeches) cannot be tolerated is that the very many innocent men, women, children and the vulnerable amongst us deserves safety and security and our own emotions must not be allowed to run wild in such a way as to endanger the lives of so many.
“And I believe that all are clear that we’re resolute in our determination as government to protect every Nigerian, everywhere in the country.
“Everywhere in this country, it is the primary duty of government to ensure the security of lives and property and we take that duty very seriously indeed.
“We will do everything within our power to defend and uphold the terms of our constitution, which declares that we are one nation under God.
” Equally not reasonable is falling for the temptation for any kind of tit-for-tat whether it is in the language used or it is in the kinds of gestures that have been expressed. This has never worked or moved anyone closer to a peaceful or sensible resolution.
“And so it’s in our bid, as government, to deal with these pressing issues and grievances, that we’ve convened these series of consultations, with various groups. It’s the right and responsible thing I think for us as leaders not to shy away from the responsibility to ensure and uphold peace and security in our country.
“And it’s my view that the responsible role of those of us who are privileged to be leaders in our society is to chart progressive and lofty courses for our people, for the ordinary people. As leaders, we carry the burden to secure the peace, progress and prosperity of our people. And that is why our voices ought to be heard and heard loud and clear at moments like this in the defense and articulation of what is truly beneficial to the nation and the people, and what is right and patriotic.
“One thing is clear – violence and war are not going to do anyone any good. They are terrible and they mean no good. They are easy to start but near impossible to end.
“It is also clear that wars sometimes start, not with bullets, but with words. Hateful, incendiary speech, opening floodgates of blood. The tongue, like the pen, is often mightier than the sword – because it is what pushes the sword into action. When we throw words like stones in a marketplace we do not know who or what it will hit.
“Knowing this, under no conditions whatsoever should we tolerate or excuse or justify hate speech or hateful conduct of any kind, especially where such is illegal. Let me of course acknowledge that as part of living together in this space called Nigeria, misunderstandings and frustrations are inevitable. Because resources are limited there will always be a striving to get what is perceived as the best seat at the table.
“All of that is normal and to be expected, especially in a democracy, like ours. A healthy democracy ought to be a theatre of energetic striving by all parties and stakeholders. But things should never descend to a level where mutual suspicions override the desire to live together in peace and harmony.
“Yesterday I made it clear, very clear that hate or divisive speech, or divisive behaviour, where it is illegal, will be met with the full force of the law. And I want to say it again today that let there be no doubt whatsoever of the resolve of government to ensure that no one will be allowed to get away with making speeches that can cause division especially violence. We will take very seriously any attempts to cause violence or to disrupt the peace of Nigeria and it will certainly not be tolerated.”
The Acting President therefore, called for frank, constructive and open talks that will ensue peace and stability across the country.
Prompt News Online recalls that Mr Osinbajo Tuesday kick-started series of consultations with the northern leaders on Tuesday at the old Banquet Hall, State House, Abuja.