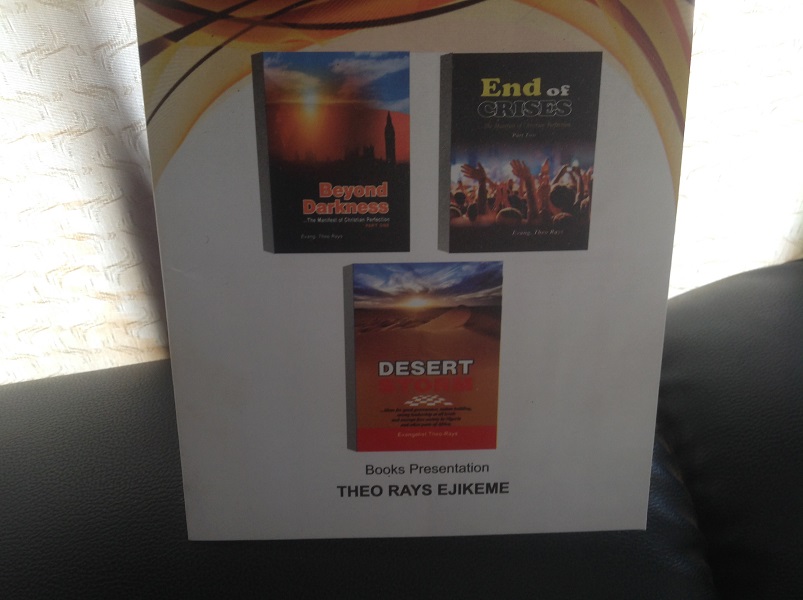 –
On Wednesday June 21, 2017 all roads lead to Leophine Residency Hotel, Ogidi in Anambra State for the public presentation of three Books written by Theo Rays Ejikeme, a journalist and correspondent of The Oracle Today newspaper. The books which are refereed as “the Books of Solution” with optimistic stories are titled: Beyond Darkness, End of Crises and Desert Storm.
Governor Willie Obiano of Anambra State and his Enugu State counterpart Governor Ifeanyi Ugwuanyi among other dignitaries from across the countries were invited to grace the occasion. The Author also uses this medium to invite progressives like Governor Owelle Rochas Okorocha of Imo State, Govenror Ayo Fayose of Ekiti State, Governor Nyesom Wike of Rivers State and Governor Nasir El Rufai of Kaduna State.

Others are Rev. Fr Ejike Mbamalu, Pastor Tunde Bakare, Rev Moses Ilo, Dr Chris Okafor of Liberation Ministry, Lagos, Prophet Ayodele of INRI Evangelical Church, Senator Dino Melaye, Olisa Agbakoba SAN, Femi Falana SAN, Former Minister of Aviation Femi Fani Kayode, State Chairman of of All Progress Grand Alliance APGA, in Anambra State and his counterparts from All Progressive Congress APC, People’s Democratic Party PDP, Labour Party, People’s Progress Party and United Progressive Party UPP, indigenous People of Biafra IPOB and many others.
According to the Author, the books are targeted at proffering a comprehensive solution to the challenges facing Ndigbo, Nigerians and other parts of underdeveloped Africans individually and collectively in Christian perspective with Nigeria as a case study. He explained that two of the books Beyond Darkness and End of Crises dwell on Christian perfection with emphasis on uplifting Christians into a stronger level to face and overcome teething challenges of global Evangelism.

The Author observes that time has come for Christians to in theory and practice “dare and conquer” the negative vices bedevilling the society most especially in those places  where Christians are predominantly the inhabitants like Alaigbo (the southeast part of Nigeria) by addressing the challenges the people face adding that the books are meant to empower the atmosphere of Christianity and enhance it to more effectiveness.

He revealed that the other book titled Desert Storm dwells on Nigeria situation as a case study thereby presenting the ugly scene of the  world’s most populous black nation as a conspicuous mark of the failure of Africans to enthrone good leadership, eliminate corruption,  eradicate poverty, huger, suffering, diseases and wickedness that have continued to ravage the continent for so long.
The book according to the Author,  presents an elaborate analysis on the Nigeria situation revealing the root causes of the many challenges facing the country and proffering solutions with ideas for good governance, mechanism for nation building and strong leadership at all levels of human setting as a family, rural community as villagers, tribes, states, regions and how to eliminate corruption and achieve corrupt free society.
He explained, “Desert Storm is a war slogan applied by America’s Allied Forces to flush out Iraqi forces out of Kuwait during the Gulf war, here it is not a war slogan, instead it is a composition of good ideas to fight bad leadership, corruption and other ills ravaging lives in the world of underdeveloped Africa with Nigeria as a case in point, Nigeria portrays a typical case of a failed man, failed family, failed Community, failed tribe, failed region, and failed state or nation, so the solution to the challenges facing Nigeria serves as solution to the challenges facing an individual, a family and all levels of human setting”
.
He explained that the entire books are focused on expanding the human view in Christian perspective for attainment of perfection adding that the books are all about creativity for perfection with emphasis on realising and unleashing  religious power of Jesus Christ. He described Religious power as the key to every other thing needed for human salvation, development, unity, peace  and progress politically, socially, economically and other wise.
He said “people as a family, community, tribe, state, region or nation need strong will power to effective participate in both divine and human decision that affect their lives,  people strong political and enduring economic power, people need good governance, strong leadership at all level, people need wisdom and knowledge for progress, but where can they get it, they will get it from God, so religious power is the key to all things.
“The Jews we all know are strong because they have the religious power of God through their father Abraham and interesting enough the Bibles says that those who believe in Christ are equally children of Abraham and are entitled to receive the dew of heaven according the what God promised Abraham. This is how it is written In Galatia 3:29“And if ye be Christ’s, then are ye Abraham’s seed, and heirs according to the promise”
He attributed the failure of some African tribes to live up to their potentials particularly the Igbo to lack of religious power on the people collectively, observing that Ndigbo are largely suffering as victims of poor atmosphere of Christianity. He observed that Islam is formidable with Organisation of Islamic Conference (OIC) Championing and defending the cause of Islam globally, but Christianity is not because churches are strongly divided
along denominational lines.
He contends that the problem facing the world today lies on the inability of Christians to realise a high degree of God power and expose people into it insisting that time has come for Christians to join forces on intent to securing God’s supernatural power to move the world to next level towards that day when every shall bow and all tongues confess that Jesus
He maintained that Christians are rich enough in human population in Igbo land with gigantic church building every turn of eyes in the cities and villages in the land, thus the people are suppose to overcome all obstacles facing the Igbo nation to the glory of God but unfortunately the atmosphere is weak because of division rising from denominational factors militating against the gospel.
He said like Ndigbo millions of Christian round the world are under-utilised because the atmosphere is not strong enough to bring the best out them noting that factors as division along denominational lines, poor level of faith among believers and quest to gather people and make money on the side of the new generation pastors have all contributed to the weakness of Christian religion.
He said “you can observe with me that the atmosphere of Christianity is currently weak because of the kind of message we preach, the prayer we say, our activities and of course the level of our faith, people are interested in quick miracle service instead of developing into competence and maturity inline with what the scripture says that is why we cannot move mountain according to the will of God as believers”
“In Europe people are leaving the church for Judaism, Islam, Buddhism and Hindus among other beliefs, People are totally backsliding to paganism and cultism to patronise shrines, deities and all sorts of devilish practice. In Europe Churches are winding up while mosques and Buddhist temples are springing up because Christianity has failed to address the challenges facing the people, that is shameful and won’t be allowed to continue” he maintained.
He said that the books address the challenges of life with emphasis on repentance and capacity building, iconoclastic reforms, human development/equality, globalisation and world peace according to the vision of God Kingdom adding that Christians must as matter of urgency present or represent Christ as the ultimate solution to the problems of life.
In the final analysis he said that the books calls for Africans to do introspection and dare to do things their own way such as politicking in their own way, praying in their own way and leading themselves in their own way adding that Africans don’t have to continue to politic or pray or lead themselves the way Americans do, the way British do, the way the Israelites do, the way the Arabs do and the Romans do.

“Former President of the United States, Barrack Obama told President Muhammadu Buhari that Africans will end corruption in Africa, so the earlier we start doing things our own way the better for us, for instance Nigeria don’t have to run two National Assemblies as the Senate and the House of Representatives because Americans do that Nigeria can go with the Senate only” he added.