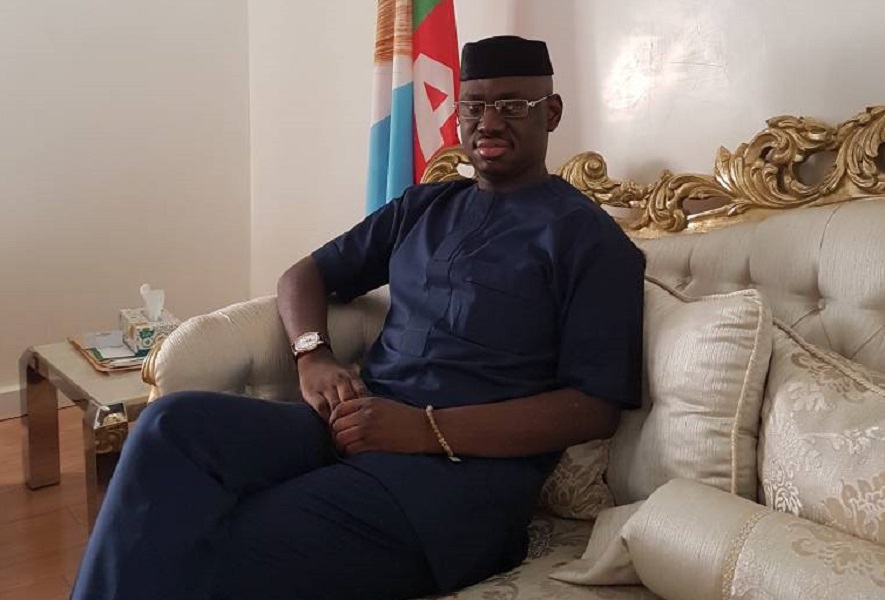 The tension might have calm down, the dust might have settled down again but the prominent role played by the outspoken deputy publicity secretary of the ruling All Progressives Congress (APC) can not go unnoticed.

The recent misunderstanding between the Kano state government, including some prominent elites and the Emir of Kano, Muhammadu Sanusi II led Emirate Council would have led to another unpalatable history in the state and the country at large if not for timely intervention of people like Comrade Timi Frank.

Timi Frank’s timely warning for the Emir of Kano not to be humiliated gave rise to the calls for government and traditional intervention in the issue “I will call on our traditional fathers to quickly intervene now before this controversy between the state government and the Kano Emirate degenerates into the unexpected. “

“While I want to make a passionate appeal to our dear Governor Ganduje and the state lawmakers not to exercise their full strength against whatever perceived wrong doings by Malam Sanusi led Emirate in Kano, I believe like other opinion leaders have said that there should be a way to amicably settle the differences,”

Frank said in a statement sent to journalists on Friday, May 12. Frank specifically begged the governor and other top state government functionaries not to promote any move that will lead to the dethronement of the popular Emir, saying such could become a bad precedence against traditional institutions in the state and the country at large.

He also appealed to the respected Sultan of Sokoto, Alhaji Sa’ad Abubakar, and other traditional leaders in the country, Northern Governors Forum and other elders in the region to intervene and settle the matter amicably.

Following the calls made by Frank and some other prominent Nigerians, the Kano state House of Assembly halted the probe. Kabiru Rurum, speaker of the Assembly, who announced this at plenary on Monday, May 22, said the action followed the intervention of some prominent Nigerians.

He also disclosed Governor Ganduje sent a letter to the lawmakers to appeal that the exercise be put on hold.

The Kano state anti-graft agency was investigating alleged misuse of N6 billion by Muhammadu Sanusi II’s Emirate Council. Emir Sanusi had posted details of his salary for April 2017 on social media after the allegations against the Emirate Council was widely reported in the media.

Many however, suspect that the probe is connected to the Emir’s recent outburst slamming leaders about the poverty level in the northern part of the country. Before then, there had been war of words between officials of the state government and the Emirate after Emir Sanusi reportedly made public comments that allegedly irked the state governor.

Emir Sanusi had in different fora taken northern leaders to the cleaners for not doing enough to develop the region. He also took a swipe at the Kano government for its empowerment programmes which he faulted.

Rumours became rife that some Northern elites want the Emir removed after he made a series of comments about the need for social reforms in the north.

One of such comments was at the Kaduna state’s investment programme titled: ‘Promoting Investment Amidst Economic Challenges.’ At the event, Emir Sanusi comments raised eyebrows when he said northern Nigeria will be the poorest if the country is broken into components. He urged the region not to use the oil rich Niger delta, commercially viable Lagos and business oriented south east to mirror the living standard of the North.

However, while many others, including beneficiaries of the Emir’s generosity and his associates prefer to stay away from the issue, one man stood on the side of the Emir and cautioned against bringing the highly revered traditional institution into disrepute by going ahead with the probe. Comrade Timi Frank, a chieftain of the All Progressives Congress (APC) who himself ran into troubled waters with the leadership of the party for his outspokenness believed that no matter what the Emir may have done, his probe will have negative impact on the traditional institution across the country as it will set a bad example for others.

His prompt spoke of the need for the Sultan of Sokoto, Alhaji Sa’ad Abubakar who is the leader of the traditional institution in the north as well as other traditional rulers in the country as well as the Northern Governors Forum to step into the probe and stop the matter from degenerating into the unexpected. What many did not remember however is the fact that similar intervention during the second republic by the then Abubakar Rimi government did it go down well with the people of Kano who felt that the government was trying to ridicule them and their leaders. The reaction then is better imagined.

To avoid such a reoccurrence, Frank also appealed to the state governor, Abdullahi Umar Ganduje to use his fatherly influence and stop the house from going ahead with the exercise by handling the entire issue with utmost care. He also appealed to the governor and other top government functionaries in the state not to promote any move that will lead to the dethronement of the Emir, saying such could become a bad precedence against traditional institutions in the state and the country at large, asking the governor to overlook some of the perceived excesses of the Emir who he described as a kind of “new generation Emir.”

He said: “I will call on our traditional fathers to quickly intervene now before this controversy between the state government and the Kano Emirate degenerate into the unexpected. While I want to make a passionate appeal to our dear Governor Ganduje and the state lawmakers not to exercise their full strength against whatever perceived wrong doings by Malam Sanusi led Emirate in Kano, I believe like other opinion leaders have said that there should be a way to amicably settle the differences.” He told the state lawmakers and the governor not to forget so soon how Sanusi spoke out the truth during the past administration which later garnered substantial support for the enthronement of APC government in the country.

Few days after Frank’s appeal reprieve came the way of the Emir when the lawmakers suspended the investigations indefinitely on the request of Governor, whose intervention many believe will go a long way in enhancing the relationship between the government and the traditional institution on one hand and enhance rapid development of the state.

By his action, the governor may have inadvertently saved a lot of lives of his people that could have been affected directly or indirectly by deposition or suspension of Sanusi as Emir as a result of the outcome of the probe. Speaker of the State House of Assembly, Alhaji Kabiru Alhassan Rurum, who announced the decision of the house also disclosed that prominent Nigerians concluding Acting President, Yemi Osinbajo appealed to the house to suspend the investigation of the emir.

According to him, two former Nigerian leaders, Ibrahim Badamosi Babangida and Abdulsalami Abubakar  as well as  Senate President Bukola Saraki, Speaker House of Representatives, Yakubu Dogara, business mogul, Alhaji Aliko Dangote, Alhaji Aminu Dantata and national leaders of the ruling  APC, Asiwaju Bola Ahmed Tinubu also intervene PDP and put a word for the Emir. The Speaker was quoted as saying that he wrote to the house appealing to them to suspend the probe indefinitely.

“Governor Ganduje has explained everything to us and we are convinced that the emir deserved to be forgiven since he has accepted his mistakes and promised not to repeat them again. The governor told the house in the letter that based on the personal remorse by the emir and intervention of various personalities he is pleading with us to stop the investigation. It is based on this that we have succumbed to his request and completely stopped our investigation. We stopped the investigation not because we don’t have the mandate to do it, but because we also want peace and harmony to continue in our dear state. Because we want the government, the emirate council and the house to continue to work peacefully”.

Frank, in another statement, however commended the governor and the members of the state House of Assembly for allowing peace to reign by suspending attempt to probe the Emir, adding that the maturity displayed by Governor Ganduje led state government and the state lawmakers in the face of emerging crisis has shown quality of the calibal of people at the helms of affairs in the state.

He also commended the Acting President Yemi Osinbajo, former Heads of state, Northern Governors forum, Sultan of Sokoto Alhaji Sa’ad Abubakar and the business mogul Alhaji Aliko Dangote, for their prompt intervention when he called on them to do so. He was however confident that the relationship between the Kano Emirate and the state government would be cemented for the good of the state.

He said: “Governor Ganduje and Emir Sanusi have shown to the world that there is no crisis that can not be resolved amicably, even though, this might not go down well with some agents of crisis who benefit more when a good leader is brought down. What has transpired in Kano is a good precedent that other States of the federation and the country need to emulate whenever there is raging crisis in the polity. I also call on Governor Ganduje, Emir Sanusi and the state lawmakers to use this opportunity to open a new chapter in the state that bring about improvement in the living standard of the good people of Kano and Nigeria at large.”