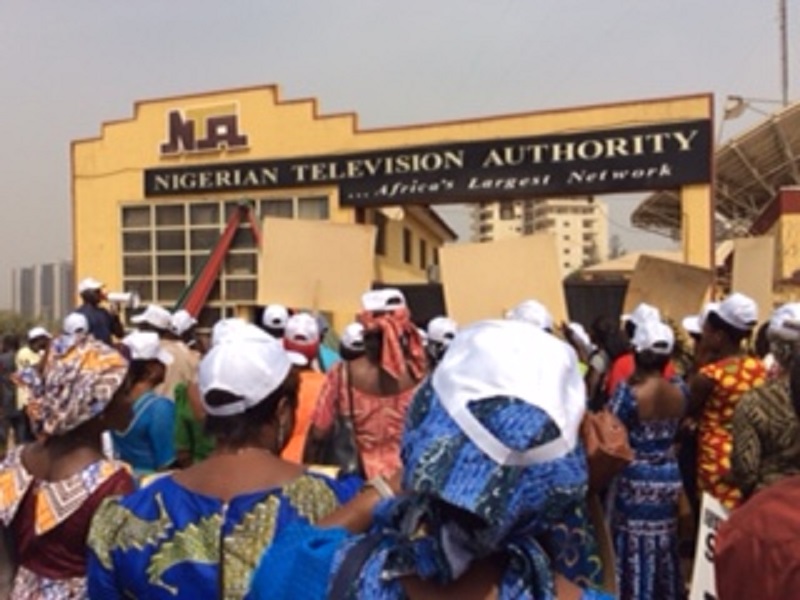 Advertisement
About 200 protesters under the aegis of Coalition of Civil Society Groups on Tuesday  stormed at the Headquarters of the Nigerian Television Authority (NTA) and the Central Bank of Nigeria (CBN) in Abuja in solidarity with President Muhammadu Buhari, saying his rumored death was the handiwork of blackmailers and mischief makers.
They urged Nigerians to pray for quick recovery of the President to avoid any eventuality, rather than play politics with his death.
For about two hours, no vehicle was allowed into the NTA premises and none was allowed to go out.
They insisted that the NTA management led by its DG, Mohammed Ibn Mohammed, should give explanation why they had refused to send their crew to cover its rally to tell the world that Buhari is alive.”
They carried placards with inscriptions such as “No country thrives on rumours and corruption, let’s support anti- corruption”, “In unity, we will end recession”, Buhari is not dead but alive”, “Nigerians, let’s pray for Buhari’s quick recovery”, “Recession will be over soon, blame past leaders” and “We pass a vote of confidence on CBN.”
President of the coalition and renowned civil rights activist, Etuk Bassey Williams, during the protest, said Nigeria cannot develop if the citizens continues to seek downfall of its leaders.
He said, “Why will the NTA DG not sent representatives to come and cover the peaceful rally in solidarity with the a President. If the DG doesn’t come out he must resign or be fired. We will occupy NTA if he refuses to come and address us. The NTA must come, cover and protect the interest of government. We have international media, but NTA refused to come for coverage.”
He condemned sponsored protests against the President stressing that Buhari should rather be supported with prayers rather than armed-chair criticism.
Williams blamed the blackmailers for heating up tension in the country and ‎further advocated for quick recovery of the president.
‎He said Buhari has been at the forefront against corruption and strived to restore peace in the nation.
According to him, past leaders should be blamed for looting the treasury and inflicting hardship on Nigerians.
They commended the CBN for initiating policies that will promote industrialisation of the country.
Williams said, “No nation thrives on baseless lies against its leaders and the incessant use of this approach by self-centred, callous and corrupt politicians. The continuous blackmail against Buhari and some of his cabinet members by some corrupt politicians who may feel aggrieved by the strict monetary and fiscal policies of the CBN and the economic team respectively through several media propaganda and sponsored protests are retrogressive actions capable of unsettling the polity and should be condemned in its entirety.”