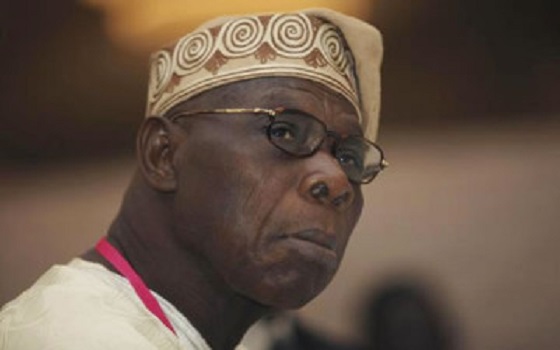 Former President Olusegun Obasanjo’s recent statements are aimed at bringing down the government of President Muhammadu Buhari, the House of Representatives said yesterday.

The lower chamber was reacting to comments made by the ex-president at a lecture in Lagos in which he dressed down the National Assembly describing it as “a den of corruption by a gang of unarmed robbers.” The former president also hit out at the judiciary, the military and the presidency.

Addressing a press conference yesterday, House spokesman, Abdulrazak Namdas (APC, Adamawa), hit back at Obasanjo, accusing accused him of introducing corruption in the National Assembly the first day he assumed office as president in 1999, and blackmailing every government that he is not part of.

“It is unfortunate that he has started his very familiar method of bringing down governments. He did it to Alhaji Shehu Shagari, he did it to Gen. Buhari, he did same to Gen. Babangida, he attempted to bring down Gen. Abacha before he imprisoned him for treason; he made frantic efforts to derail the government of President [Umaru Musa] Yar’adua when he couldn’t use him. He supported President Goodluck Jonathan but when he refused to take dictation, he turned against him. He supported President Buhari, but since he has sensed that Nigeria is having economic difficulties under him, he has pounced to derail his government.

“The way Chief Obasanjo talks gives the impression that he is a lifetime opposition leader who has never held any office. What did he do about the issues he raised in his eight years as President?” he asked.

On the former president’s position that the House was threatening the life of the suspended former chairman of its appropriation committee, Abdulmumin Jibrin, who exposed the corruption perpetrated in the 2016 budget, Namdas said Obasanjo had allowed himself to be hoodwinked.

“We have repeatedly maintained that there was no ‘padding’ of the 2016 Appropriation Act, which is a legitimate document passed by the National Assembly, authenticated by the Clerk to the National Assembly as provided in the Acts Authentication Act and assented to by Mr. President. It is most unfortunate that a former President of Chief Obasanjo’s stature would allow himself to be hoodwinked and procured by a renegade member of the House, who embarked on massive propaganda and lies just because he was removed from office,” he said.

Namdas, who said the House would ordinarily not join issues with Obasanjo, said all the ex-president’s allegations on the National Assembly were outright lies and misstatement of facts.

He also said the budget of the National Assembly is not high as alleged by Obasanjo, adding that the federal legislature was “grossly underfunded and is hampered from effectively and legitimately carrying out its constitutionally assigned functions.”

“National Assembly Budget also funds the National Institute for Legislative Studies, which is a legislative think-tank and highly rated academic institution that serves both National and State Houses of Assembly and even international legislators,” he added.

Namdas said no member of the House of Representatives receives N10m every month, adding that the amount each member takes monthly was not anything near what directors in some agencies take individually.

He said “Undoubtedly, the former president Obasanjo is understandably angry with the National Assembly as an institution having foiled his ambition for a third-term in office even after trying to corrupt the members with a bribe of at least N50m each. Lest we forget, the person who introduced corruption to the National Assembly is Chief Olusegun Obasanjo.”

“What this shows is that we need to really show seriousness in this war against corruption. We cannot continue to live with just allegations, specific incidents should be focused on and thorough investigation carried out and anybody found to have corruptly enriched himself or other persons should be dealt with accordingly. We can’t just continue to be making allegations against people or institutions and leave it at that.”

Abiodun Layonu (SAN) said he believes that Nigeria and Nigerians will be the ultimate beneficiaries of the verbal confrontation. “When Obasanjo reveals what he knows and any investigation is carried out and the National Assembly comes out with what they have, Nigeria will benefit. It should be encouraged.”

He said the comments should be taken seriously “even though the speaker is known to be given to exaggeration.”

Also commenting, Chief Mike Ozekhome (SAN) said the House of Representatives is not far from the truth in terms of allegations of corruption under Obasanjo’s presidency. He said corruption is not just in the giving and receiving of bribe, adding that mis-governance, which was prevalent under Obasanjo, is the worst form of corruption.

He said it was under Obasanjo’s administration that Nigeria was rated as the most corrupt country for three years under anti-corruption bar of Transparency International. He said Nigerians still remember how the former President wanted to remain in power against the provisions of the Constitution and how he turned the Economic and Financial Crimes Commission (EFCC) to “an attack dog” to go after his political enemies. He added that Nigerians still remember the numerous scandals like Halliburton, the National Identity Card scandals that happened under his watch.

In July this year, Obasanjo, during a visit to the presidential villa, said the allegations of budget padding in the National Assembly by suspended lawmaker Abdulmumin Jibrin had vindicated him, adding “if there are people who didn’t believe what I said in the past, then you now say that what has come out confirms what I said in the past.”

In October this year too, Obasanjo, while speaking in Abeokuta, Ogun State, during the opening of the 8th National Council on Industry, Trade and Investment, said constituency projects by members of the National Assembly must stop.