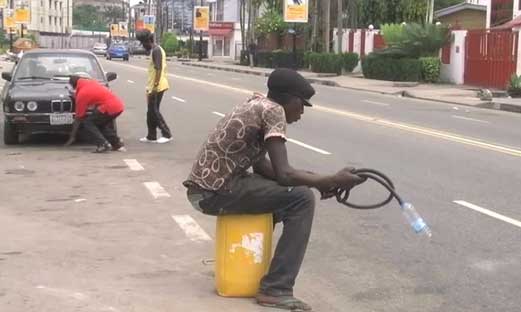 About two decades now, I have been engrossed in finding the reasons and facts to fault my conviction that Nigeria does not have the requisite level of discipline that matches her development potentialities and aspirations. In other words, Nigeria’s level of discipline cannot carry and sustain the level of development she can attain and of which the entire African continent and indeed the World look forward to. Some may consider me to be a lazy thinker by asking: “What has discipline got to do with development? Why should it take him about twenty years to fathom what the reasons and facts are that supports this thinking?” But in this thinking profession, it is not done until it is done. Also in this profession, this type of laziness is not a crime.

What is development? What is discipline? How exactly do they relate to each other in the development of society? From my understanding of society development, it could mean the ability of a people to consistently move-up who they are and what they have thereby achieving a sustained well-being of their lives. Development is about who you are and what you have and your ability to combine these factors such that a progressive standard of living is achieved at all times. So the key issues in society development are people, resources, capacity and well-being. Indeed the ultimate focus of development is the well-being of people and that was why late Professor Claude Ake said that development must come from within (the people), not without. Therefore any development that comes from outside the capacity of the people cannot qualify as development. Every developed society have their people, their resources and their capacity to combine all these in such a way that they produce their goods and services that meet their level of needs and sustain their well-being. Developed people are highly organized, they have high respect for the rule of law, they have high respect for their history and they protect common values and goods. They design, create, build and maintain their infrastructure and systems. An example of a developed people is the Peoples Republic of China.

With respect to discipline, two exposures informed my understanding of what discipline is. In 1984, Nigeria experienced a programme called War Against Indiscipline (WAI) introduced by the then military government of General Mohammadu Buhari (GMB), now transmuted to President Mohammadu Buhari (PMB).  Among others, it required of us to be orderly in our daily public conducts. That was how I learnt to queue in public places like banks, post offices, students’ cafeteria and indeed all other places where many people are expected to access some public services. Even in private places we began to adopt first come first served and we began to learn how to prioritize our choices both as individuals and as families.  With that era, I discovered that discipline helps to remain organized, obey the laws, create and sustain common goods etc. Also, I will never forget an article written in about 1996 by Prof. Tam David-West (my distant mentor) and published in The Guardian. It was about indiscipline and he enumerated acts of indiscipline to include placing or dropping of things indiscriminately in one’s room. Since that day, I became very conscious how I place/drop things in my room and that led me to have my room always well-arranged and neat. From these basic examples, one can say that discipline means doing things in the right way/manner or doing what is right such that what is done accords with your conscience and must be in consonance with secular laws of the land. It means being in order or acting in generally accepted ways that will not corrupt the society. Such behaviors yield both private and social goods. As a Christian, discipline involves being Christ-like and obeying your conscience at all times. The Peoples Republic of China is a good example of a disciplined society. In China, if you act against the law, even if you were a past president of the country, the law must take its course. The law is not a respecta of persons. Discipline sustains institutions, while indiscipline destroys institutions.

Lack of discipline or indiscipline can be seen in all acts like stealing of public and private funds, abuse of tribalism, refusal to carry out works based on the ethics of those works, giving undue preferences to people of your tribe (as practiced in Nigeria by the Hausa-Fulani, Igbo and Yoruba), disrespect for elders and the laws of the land, homosexuality, wearing bedroom cloths in the public, over dressing, giving and/or taking of bribe to do one’s job for which one is paid, sexual harassment, despoliation of the environment via pollution, urinating along the road, switching on of electric generation sets that disturbs the serenity of the neighbourhood, neglecting the minorities in Nigeria in having access to Federal offices and opportunities, speaking unofficial languages in the office to cheat others, etc. It means not being in order or acting in such a manner that is generally not acceptable. Such acts are very capable of ruining the society because it negates all efforts to ensure productivity, it destroys the values and common goods of the society. It is the parent and master-mind of disorderliness. It destroys goodness and enthrones whatever that is bad, ugly and generally unacceptable. It breeds unguarded behaviours like threatening to throw human beings into the lagoon without any moral justification, hiding under religious fundamentalism or resource control to kill, rape and kidnap people in order to be given amnesty and have access to the national wealth. As a bishop or imam, it is indiscipline not to see and speak truth to political leadership because you want to have access to the wealth of the state. Lack of discipline welcomes the unproductive rich and hates with great scorn the productive poor etc. Nigeria is a good example of a society ruined by indiscipline.

So, what is the relationship between development and discipline?

From Mathematics we know that when there exists a linear relationship between two variables, any change in one affects the other. For example, we were taught in basic Economics that the higher the price of commodity X, the higher the amount of commodity X supplied to the market and conversely. So if the price of commodity X rises by 10%, it will lead to a corresponding increase in the quantity of commodity X supplied to the market and vice versa. The implicit factors that enable the suppliers respond to the price increase are the strong desire in them to maximize profit and more importantly the supplier must have the capacity to produce and supply that incremental quantity, otherwise this principle fails. So it is with our instant case between society development and discipline. When the level of discipline is high in any given society, this thinking believes that it will lead to high level of development in that society. Example is the level of discipline that exists in most advanced World; remove discipline, they crumble. In other words, when discipline falls, development falls; when discipline rises, development rises (all things being equal). This linear relationship between development and discipline is crucially critical for understanding the reasons behind unprogressiveness suffered by most undeveloped societies of the World.

Yet in these undeveloped societies, people remain very anxious and expectant for development. Their argument is that they have all it takes to become developed. They have people, resources, some level of capacity, infrastructure and systems; yet they are not developed. Some high grammar speaking intellectuals in such societies even go as far as suggesting strong institutions as panacea; they forget that institutions that are administered by indisciplined minds cannot succeed in rendering services for which it was established.  Discipline is the engine room that makes an institution function efficiently and effectively and succeed. No discipline, no institution and no development.

In Nigeria most of our big boys think discipline is not an issue and they always overlook it. I disagree. Lack of discipline killed Operation Feed the Nation (1976-1979), Green Revolution (1980-1983), WAI (1984-1985), MAMSER/DFRRI and Structural Adjustment Programme (1986-1993), Visions 2000, 2010 and 2020(1996-2010), NEEDS, SEEDS and MDGs (1999-2015). Lack of discipline killed NITEL/MTEL, NEPA/PHCN, NNPC and the Refineries, etc. Who can estimate the amount of money Nigeria spent and lost on these programmes and institutions? Only God knows! Yet they all failed. Why did they fail? Some people will simply answer: bad management and corruption. But they will not go further to ask: why were the managers of these efforts corrupt? They were corrupt because they lack discipline. With discipline, even without huge resources, you can record recognizable development. That is why in the World today, Ghana, Botswana, Cuba etc are being appreciated. So the level of development of a country has not much to do with resources which are given, but more to do with the level of discipline deployed in the management of the available resources.

It is discipline that can effectively organize the people and their resources using available capacity into a sustained flow of economic, social and political progress. In fact discipline is a factor of production because without it, no nation can develop. That is why I totally disagree with Acemoglu and Robinson in their book “Why Nations Fail”. They were of the strong view that the key difference between the developed countries (USA) and undeveloped countries (Mexico) is the lack of strong institutions in the latter. Our dear Prof. Pat Utomi is also of the same view. I disagree with them because in every human society, there must be institutions and systems created to administer society’s resources etc. But systems, institutions and their laws need human beings to function; recall that man is the most important agent of development. Discipline helps man to ensure that the systems, institutions and laws work. If man is compromised or lacks discipline, the systems, institutions and laws fail. The United Nations and indeed any developed country cannot function effectively if their leaders and administrators lack discipline. Therefore, in today’s undeveloped World, discipline is the issue in human development.