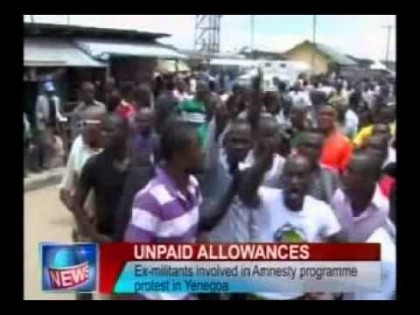 Loading ...
They are also calling on President Muhammadu Buhari to immediately appoint a Special Adviser and Chairman of the Amnesty Committee to ease the sufferings of the students, saying its due to the absence of a Head in the Amnesty office that students are experiencing untold hardship.
In a communiqué issued at the end of their meeting at Birmingham City University, United Kingdom, and made available to newsmen yesterday in Yenagoa via e-mail by their coordinator, Comrade Emomotimi Ziprebo Pius of Birmingham University, the students regretted that similar programmes being funded by the federal government like the PTDF with oil money from the region are given special attention and their allowances and stipends are paid promptly.
The communiqué which was co-signed by Elliot Yibakeni of Swansea University on behalf of Wales and Raphael Frank of Aberdeen University on behalf of Scotland, the students also want a review of the programme which will take care of the life span of the running programme, even as they reject the collapsing of the programme with the ministry of the Niger Delta Affairs.
“The suggestion of collapsing the office of the Special Adviser to the President on Niger Delta Affairs and the Amnesty programme into the Niger Delta ministry or any bureaucratic creation, supposedly at the expiration of the present subsisting Amnesty proclamation by the end of this year should also be discarded as it does not acknowledge the unique nature of the scheme.
“But what is required is a fundamental restructuring of the Abuja and London offices and elsewhere. Idle minds and unproductive hands should be weeded away and students who know where it pinches most should have representatives in the offices, likewise for those that are engaged in other capacity building trainings and empowerment programmes”.
They also decried the idea of training students both outside the country and within Nigeria without any arrangement to gainfully engage them to contribute meaningfully towards the growth of the country, pointing out that such situation should be addressed by the government at various levels.
The communiqué also noted that the present government should boldly and creatively take steps that would pave the way for Nigeria to explore and exploit the bountiful human and natural resources that abound in the country, saying the absolute reliance on oil should be de-emphasized and the revenues presently generated from oil should not be expended on wasteful and experimental ideas but on innovative, creative, result driven and implementable ideas that would lift the country from the present state of less economically viable state to an export driven and industrialized nation.
They however, expressed concern over the declaration of December 2015 as the end date of the amnesty programme, even as they commended President Muhammadu Buhari for his special reference of Niger Delta as one of the cardinal objectives of his administration’s focus in his inaugural address on 29th May, 2015 with respect to the physical and infrastructural development of the region.