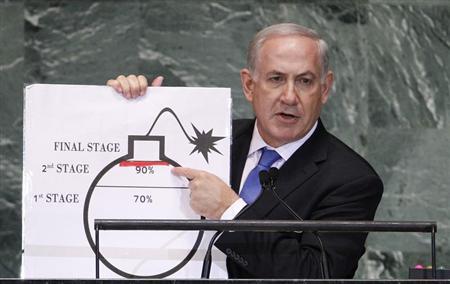 Israel’s Prime Minister Benjamin Netanyahu points to a red line he has drawn on the graphic of a bomb as he addresses the 67th United Nations General Assembly at the U.N. Headquarters in New York, September 27, 2012.

JERUSALEM (Reuters) – Israel risks a loss of credibility over both its “red line” for Iran‘s nuclear programme and its threat of military action, and its room for unilateral manoeuvre is shrinking.

After years of veiled warnings that Israel might strike the Islamic Republic, Prime Minister Benjamin Netanyahu laid out an ultimatum at the United Nations last September.

Iran, he said, must not amass enough uranium at 20 percent fissile purity to fuel one bomb if enriched further. To ram the point home, he drew a red line across a cartoon bomb, guaranteeing him front page headlines around the world.

However, a respected Israeli ex-spymaster says Iran has skilfully circumvented the challenge. Other influential voices say the time has passed when Israel can hit out at Iran alone, leaving it dependent on U.S. decision-makers.

“If there was a good window of opportunity to attack, it was six months ago – not necessarily today,” said Giora Eiland, a former Israeli national security adviser. Pressure from Washington, he said, had forced Israel to drop its strike plan.

Israel has long insisted on the need for a convincing military threat and setting clear lines beyond which Iran’s nuclear activity should not advance, calling this the only way to persuade Iran that it must bow to international pressure.

Serving officials argue that Netanyahu’s repeated warnings of the menace posed by Iran’s nuclear project have pushed the issue to the top of the global agenda and helped generate some of the toughest economic sanctions ever imposed on a nation.

But some officials have also questioned the wisdom of his red line, arguing that such brinkmanship can generate unwelcome ambiguity – as the United States has discovered with its contested stance on the use of chemical weapons in Syria.

Amos Yadlin, a former military intelligence chief who runs a Tel Aviv think-tank, suggested last week that Israel had also got itself into a tangle, saying Iran had expanded its nuclear capacity beyond the Israeli limit, without triggering alarms.

“Today it can be said that the Iranians have crossed the red line set by Netanyahu at the U.N. assembly,” Yadlin told a conference at the Institute for National Security Studies (INSS), which he heads.

Netanyahu’s office declined to respond to Yadlin’s remarks, noting that the prime minister, in recent public statements, had said Iran was “continuing to get closer to the red line”.

Tehran denies there is any military component to its nuclear activities, saying it is focused only on civilian energy needs. It charges that Israel, widely believed to have the Middle East’s only nuclear arsenal, is the greater regional threat.

Keeping in step with Netanyahu, Israeli defence and military officials issued clear warnings this month that Israel was still prepared to go it alone against Iran, once more beating the drums of war after months of relative quiet.

“We will do what is necessary when it is necessary,” armed forces chief of staff Benny Gantz told Israel Radio on April 16.

But there is increasing scepticism within diplomatic circles about the viability of such an option. Envoys doubt that the Israeli military could now make much of a dent on Iran’s far-flung, well-fortified nuclear installations.

“If nothing happened last year, I struggle to see why it will happen this year,” said a top Western diplomat in Tel Aviv, speaking on condition of anonymity given the sensitivities.

Israeli President Shimon Peres has done little to bolster belief in unilateral action, making clear this month that he thought U.S. President Barack Obama would be the one to go to war against Iran if nuclear diplomacy failed.

“He knows no one else will do it,” Peres told Israeli TV.

The United States offered Netanyahu a new array of military hardware last week, including refuelling tankers that could be used to get fighter jets to and from Iranian targets.

However, Israel cannot match the sort of firepower that the United States could bring to a battlefield. For example, Israel lacks the biggest bunker-busting bombs that experts say would be needed to penetrate Iran’s underground Fordow enrichment plant.

Such limitations always cast doubt on a possible Israeli assault and the more time passes, the more the doubts grow.

Ehud Barak, the previous Israeli defence minister, said in November 2011 that within nine months it would probably be impossible to halt Iran because it was increasing the number of centrifuges and its network of sites, creating what he termed a “zone of immunity”. Seventeen months have gone by since then.

Washington has promised Israel it will not let Iran develop a nuclear bomb. Israelis get jittery, however, because they have set a very different clock for when they believe it would be necessary to intervene – hence the importance of the red line.

The Israelis make no distinction between Iran developing the capacity to build an atomic bomb and having the actual weapon. Yadlin told the INSS conference that as soon as Tehran could put just one rudimentary device on a boat and sail it to an Israeli port, it was a de-facto nuclear-armed nation.

Some analysts question whether Iran would indeed attack Israel if it had an atom bomb, or even try to build one, rather than just establish an apparent nuclear capability to project deterrence and regional power. To fire a nuclear weapon at Israel, they say, could spell the ruin of the Islamic Republic in counter-strikes by a foe with a far bigger nuclear arsenal.

Gantz himself said last year he felt Iran’s leadership was “very rational” and unlikely to build an atomic bomb.

The U.S. concern is to prevent Iran, which has called for Israel’s destruction, from reaching the verge of acquiring a nuclear bomb – a nuance at variance with Israel’s position that provides a longer window of opportunity to continue diplomacy.

Exasperated by Washington’s refusal to set a clear ultimatum, Netanyahu came up with his 240-250 kg (530-550 pound) limit for 20 percent enriched uranium, hoping this would concentrate minds. The Iranians stayed below this threshold by converting 110 kg of the gaseous material to solid form that they say is destined to power a research reactor.

Yadlin said that rather than turn all of this into solid reactor fuel, Iran had kept 80 kg of it in the interim powdered state. That, he said, could be converted back to original gas form in around a week, inflating the stockpile beyond 250 kg.

With the red line in possible jeopardy, and unilateral military action in doubt, one security official suggested that Israel might turn to covert sabotage, with renewed focus on those specifically working on the 20 percent enrichment.

Five Iranian scientists and academics have been killed or attacked since 2010 in incidents believed to have targeted Iran’s nuclear programme. Israel has remained silent about the attacks and other known acts of sabotage at Iranian sites.