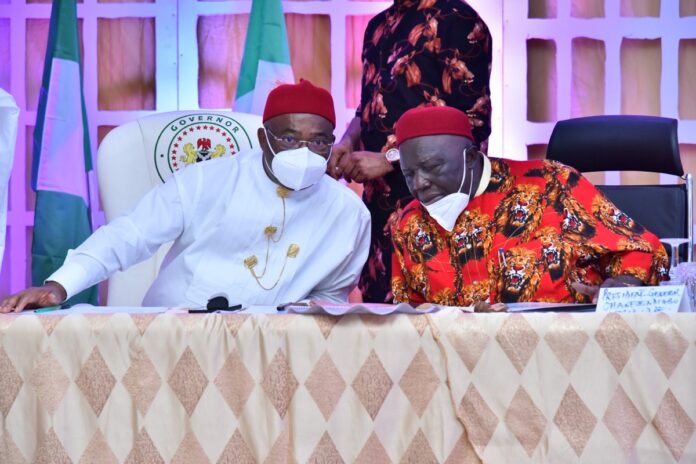 The Elders Council of Ohanaeze Ndigbo under the leadership of Amb. (Prof.) George Obiozor as President General of Ohanaeze Ndigbo World met in Owerri, the  Imo State capital on Saturday, March 27, 2021 and insisted that for fairness, equity and harmonious co-existence of Nigerians there is need for restructuring.

In a Communiqué issued at the end of the meeting, the socio-cultural umbrella body of Ndigbo World-wide agreed that there is need for the different components of the Nigerian nation to come together and dialogue on its future.

Highlighting the points in the communiqué Prof. Obiozor informed that there has to be convocation of a robust and intellectually fecund national dialogue on the political, economical, social and cultural structure of Nigeria vis-a-vis the essential challenges the Nigerian Nation is currently confronted with.

The communiqué also highlighted issues of security/insecurity which has become worrisome in the country as a whole with the Ohanaeze Ndigbo leadership mandated to work in close consultation with State governments in Igboland to faction out ways of reducing the vulnerability of those residing in any part of Igbo land.

The Elders Council noted that Igboland needs a security outfit that will address issues that are peculiar to the nature, culture, tradition, topography etc of the people and also give support to efforts of the Federal Government of Nigeria.

They frowned at the current situation whereby Ndigbo leaving in other parts of Nigeria become easy target and Guinea-pigs during hostilities, both within the country and even in some parts of Africa like Ghana and South Africa.

In the same the Elders Council mandated Ohanaeze Leadership to faction out ways of encouraging Government in the Igbo speaking States to become more proactive in the pursuit of policies that will boast both Agriculture and Manufacturing. The Council decried the recent national statistical figures that ascribe some Igbo speaking States as ranking highest in the number of unemployed people, pointing out that a home grown approach for tackling the unemployment monster should be pursued without any further delay.

On Nigerian President of Igbo extraction, the Elders Council mandated the President General to work in close consultation with the Igbo socio-cultural and political intelligentia to pursue the task of ensuring that the Igbo take their turn in producing the next President of the Federal Republic of Nigeria come 2023 General elections. This, the council insisted, is only achievable in consultation with other ethnic nationalities as the elders urged every Igbo man or woman with the needed capacity to show interest in the 2023 presidential race.

Furthermore, the Council mandated Ohanaeze Ndigbo leadership to pursue a deliberate policy of ensuring a noticeable and measureable improvement in the quality of education in Igboland.

Also they noted that while it recognizes the right of every Nigerian to freedom of speech, nobody henceforth, has the authority to speak on behalf of Ndigbo except the President General of Ohanaeze Ndigbo. To that effect, the Elders therefore directed the Ohanaeze leadership to go into direct talks with other ethnic groups and governments at all levels on ways of finding a lasting solution to the myriads of problems facing the Nigerians nation.

Adressing the media briefly after the meeting, the host Governor and the Governor of Imo State, Senator Hope Uzodimma commended the efforts of Ohanaeze Ndigbo leadership World-wide on what they have achieved in a short while.

The Ohanaeze Ndigbo Elders Council was well attended with the presence of the Governor of Ebonyi State, Dave Umahi,  Governor of Enugu State (represented by the State’s SSG),  Senators, House of Representatives’ members, Ministers,  past President General as well as Apex leaders such as Engr. Emmanuel Iwuanyanwu (Ahaejiagamba) and First Republic Minister of Information, Mbazulike Amaechi.