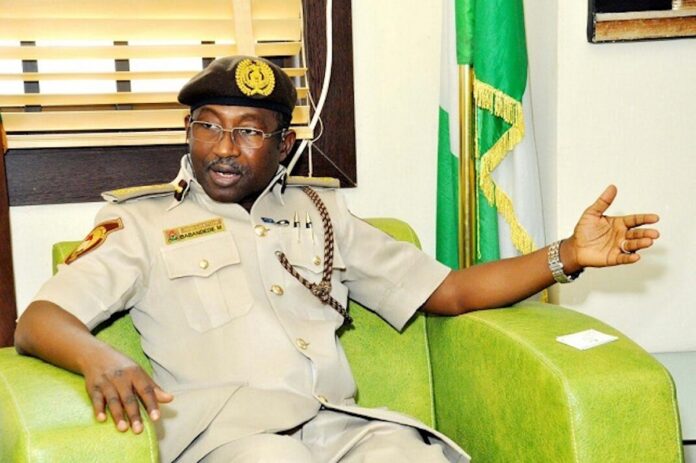 With insecurity in Nigeria reaching new unbearable crescendo amidst nonchalant demeanour from the security architecture including the President of the federal republic of Nigeria, Muhammadu Buhari, the populace have become publicly agitated like never witnessed in Nigeria. This is as the Nigerian Immigration service [NIS] have become one of the parastatals at the attention of most security experts – due to the increased influx of bandits into Nigeria through porous borders in the northern region.

The Controller General [CG] of NIS, Mohammed Babandede whose tenure expired in September 2020 is reported to have gotten an additional one [1] year extension from the presidency. This is as many within the leadership of the NIS doubt the actual extension grant to him. Many of the senior officers at the NIS who spoke to 247ureports.com charge that the CG was not given a legal and/or legitimate extension by the President – some imply he may have gotten an extension from the backdoor – through his coziness to the Minister of Interior – which is the supervising ministry.

In line with the supposed extension, the CG issued a circular to the NIS staff [Ref. NIS/HQ/CGI/806/004] dated February 3, 2021 cancelling one of the civil service rules concerning retirement and vacation/leave. According to civil service rule, all retiring civil servants must take the last three months of their stay as a civil servant as mandatory leave. The CG’s letter cited a letter from the Minister of Interior [Ref. HMI/002/x1/283] dated February 3, 2021 as having instructed the NIS to undertake the cause of action. See copy of letter below:

Top echelons of the leadership structure inside the NIS believe the Minister’s letter to have been written to clear the CG from having to exit the NIS from as far back as June 2020 [– that is three months before his actual retirement date of September 2020]. They point to the date of the letter as one of the suspicious marker.

Nonetheless, new revelations from security experts who have first-hand knowledge of the goings on within the Nigerian security structure charge Mohammed Babandede as having directly or indirectly aided the influx of Fulani militia and other bandits into the country. “I know Babandede very well. he is very tribal and nepotistic. He belongs to the Kaduna gang which believe the north owns Nigeria” – explained the security expert who charged that the CG was nepotistic in his execution of his duties at NIS. “His DNA cannot allow him see beyond the north just like his friend Buhari”. The source indicated the CG is known to openly boast of his closeness to the cabal at the presidential villa. “In fact he claims to be part of them”.

An illustration of the CG’s tribal tendencies is contained in a recent posting of senior staffs to a lucrative station at the Maitama Passport Express Center [MPEC] – where fourteen [14] out of the sixteen [16] staff members posted northerners and Muslims. The posting order is contained in a circular as shown below [Ref. NIS/HQ/ADM/4422/VI/20] dated February 10, 2021. Other lucrative postings ordered by the CG are reported to be either nepotistic or highly tribal. This includes postings to foreign countries and the-likes.

The northernization culture, during the tenure of Babandede as CG, has taken hold within the NIS and has extended to the country in general. Particularly the control of influx of bandits through the northern borders. According to a source inside the NIS who spoke to 247ureports.com, the CG worsened an already bad situation at the borders. He virtually erased at the borderlines separating Nigeria with Chad Republic, Niger Republic and Cameroon. Babandede’s NIS allowed the countries neighbouring Nigeria on the northern region to take northern Nigeria as part of their country. The source indicated that during the heighten of border closer when President Buhari called for closed border under strictest conditions, the northern borders were left open – to the clear knowledge of the CG.

“There is no border” said the source who explained that the majority of the immigration officers at the northern borders are majority northerners. They are not too eager to enforce Nigeria’s immigration laws against people their believe to share the same culture with.

The source cites an example.

Most of the residence near the border attend Mosque across the border inside Niger Republic – and would return to the Nigeria side of the border after attending Mosque. They would trek back into Nigeria with their prayer beads and long kaftan. The Nigeria immigration officers are left with no options but to allow them crossover into Nigeria. “To the folks that residence in the border area, there exist no border. They see the area and the people as one. They share the same religion and culture and language. There is a closer affinity to the folks in Niger Republic than to the folks in North Central or Southern Nigeria. They don’t see the border. They come and go at will. And, the CG’s actions encourage it.”

A reinvigorated NIS will nip the influx of foreign bandit in the bud. The current CG has proved his inability to nip it.