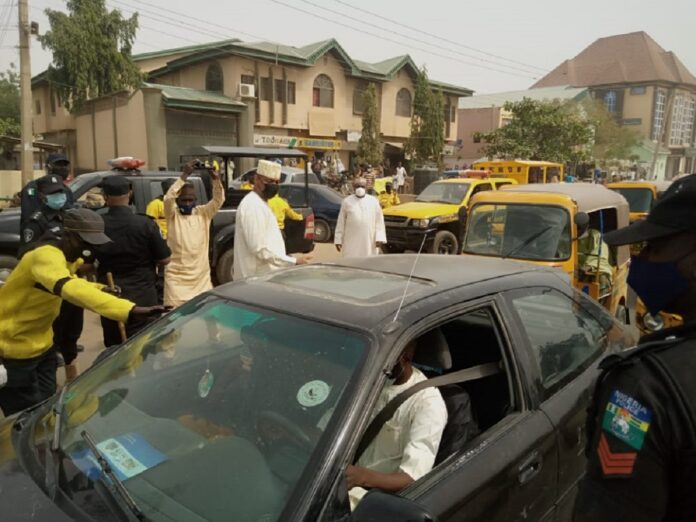 About 25 of the offenders were remanded in a Correctional Facility, as they were not able to pay a fine of N5000 each.

247urpeprts.com reports that about 21 Mobile Courts were moving round with the Taskforce Committee chaired by the Managing Director of Kano Road, Traffic Agency (KAROTA), Hon. Baffa Babba Danagundi, who comfirmed that 102 violators paid the N5000 each before securing their freedom.

According to him, “from what we have witnessed, I can tell you that Kano is recording 90 per cent compliance. We are moving round with Mobile Courts. Violators are being tried immediately.

” We thank  God that Kano people are complying. We pray and hope that people should continue to were face masks because it is for the interest of their health.

” However, those who have refused to comply are facing the wrath of the law. People should continue to abide by the rules. Face mask wearing and strict observance of other COVID-19 protocols have come to stay.”

He also charged market leaders to ensure strict observance of COVID-19 protocols, hinting that, ” definitely, we are considering closing down markets where the Protocols are not observed.

“We are gathering intelligence on the level of compliance at these markets. We will have meetings with the market leaders. When they fail to comply, we may be forced to close down the markets.”

Also, in a Statement released by the state Commissioner for Information, Malam Muhammad Garba,. who is also a member of the Taskforce Committee, he confirmed that about 200 people have been arrested, fined or incarcerated for violation as a combined team of security agencies and COVID-19 marshals continue to sensitize and enforce safety protocols in the state.

He added that of the total figure of the violators, 102 were fined N5, 000 each, while 25 others have been remanded in prison by the 21 Mobile Courts set up to deal with non-compliance to safety protocols which had been identified as a huge challenge to curbing the spread of the virus.

He said the enforcement measure became necessary to preserve public safety and ensure full compliance with the Coronavirus prevention protocols, particularly the use of a face mask.

Malam Garba said the enforcement, which is led by the state Road Traffic Agency (KAROTA), comprised of the police, Nigeria Security and Civil Defense Corps, Department of State Security Service and the COVID-19 marshals, is being executed in strategic locations, where violators are arrested.

The Commissioner pointed out that the decision was in response to the coming of the new variant that calls for caution and adherence to safety measures in the state.

He noted that despite the new wave of COVID-19, which is tougher than the first wave of the pandemic, residents are refusing to observe the infection, prevention and control (IPC) protocols.

Malam Garba warned that any resident that refused to observe safety protocols would be arraigned before the mobile court.

The commissioner, who called for the cooperation of the public, assured that government would continue to improve enlightenment and persuasion to halt rising cases of death and infections in the state.