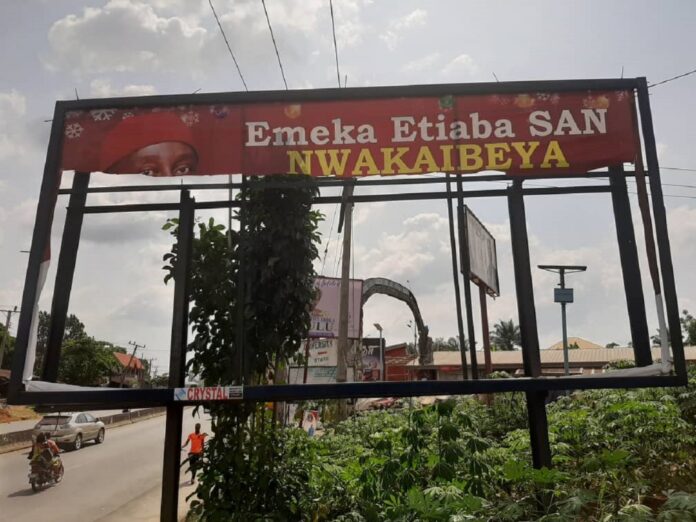 Era of political intolerance sets in in Anambra State as Emeka Etiaba SAN’s bill board is vandalized in Ihiala.

“Driving through Ihiala this morning, I noticed that the bill board hosting Emeka Etiaba SAN as he wished Ndi Anambra a wonderful season has been torn apart by persons unknown. I wondered what the motive was especially when I realized that other aspirants’ (to the office of governor of Anambra State) bill boards were untouched and standing. Eight months to political parties’ primaries, the heat is setting in and the intolerants have started manifesting. This ugly testament is bad for the polity and must be condemned by all. Who knows what next” – stated a close security official in Anambra State following a cursory security sweep of the State during the yuletide season.

It was observed that the tension of the upcoming gubernatorial election in Anambra State to be slowly heating up as the election draws nearer. Campaigners have begun dipping their hands into their bag of tricks and dirty games. One of which includes vandalization of perceived opponent’s campaign materials.

At Ihiala in Anambra South Senatorial district, a billboard with the photograph of Emeka Etiaba SAN, a gubernatorial aspirant under the PDP, was vandalized by perceived political enemies.

It is believe Emeka Etiaba may possibly corner the party’s nomination ticket – judging by the new developments within the PDP in Anambra State.

Emeka Etiaba is the son of the first female governor in Nigeria. Dame Virgy Etiaba.