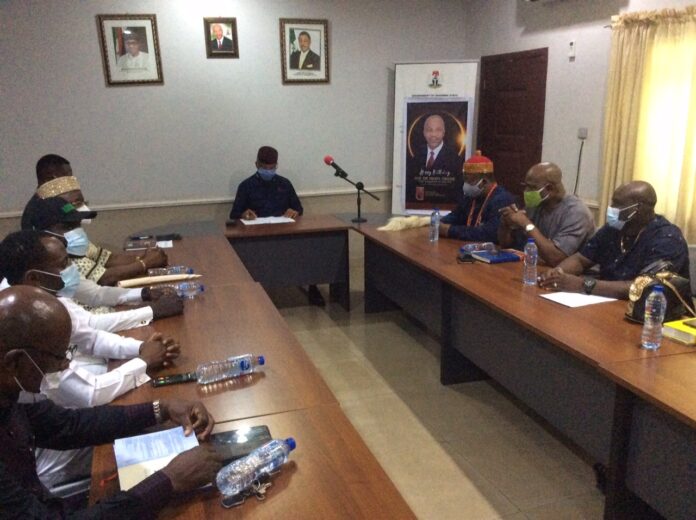 *gets 21 days to wind up, and 4-point terms of reference

The Anambra State governor, Willie Obiano has Tuesday afternoon inaugurated a 14-man panel with a 4-point terms of reference to look into the last weekend’s latest communal dispute between the Aguleri and Umuleri communities, both in Anambra East Council of the state.

The panel which was inaugurated on behalf of the governor by his Deputy, Dr Nkem Okeke has retired Air Vice Marshal Ben Chiobi as chairman, who is also the governor’s aide on Security Matters, Mrs Ndidi Onugbo as Secretary and the traditional rulers, the president generals and Youth Leaders of both communities as members.

The members went into sitting immediately after the inauguration formalities at the conference room of the deputy governor told journalists that they mean business, urging the citizens to maintain peace as the perennial clashes between the two neighbouring communities would be decisively resolved this time.

In a brief remark while inaugurating the panel, the deputy governor described the crisis as one of those problem that have defied solution in the past. He therefore urged the panel to look into some of the past reports on the clashes of the past as it would surely be helpful. He pointed out his displeasure over the issue as it clear no human being would go to the great beyond with any land; as they will always be left behind.

The chairman expressed happiness that relative peace has already been restored but reiterates need for the curfew in place to be maintained and respected by all. Want to see that there becomes an everlasting peace between the two communities. That with the Igwe of Aguleri -Ezeudo Dr Mike Idigo and Igwe Ben Emeka of Umueri in the panel; the President General of Aguleri -Barrister Hipo Onwuegbuke and that of Umueri, -Sunday Udealor on the panel they would surely get to the bottom of the recurring crises and permanently extinguish it this time.

He admitted being aware of similar panels in the past, but that Governor Obiano, being a son of the area(Aguleri) was keen on having it solved permanently this time. He charged the traditional rulers to tell their subjects to sheath all swords in the interest of least and good neighbourliness.

They have three weeks to conclude and present their report. Among the terms of reference include :

*Establishing the immediate cause of the clash.

*invite and interview the families who own the lands in dispute.

*establish the actual boundary between Aguleri and Umueri as a whole.

*recommend other possible solutions that would guarantee lasting peace in area.

Others members included the Commissioner for Lands -Mr Bonaventure Enemali, the immediate past Surveyor General of the state, Mr Ifeanyi Ajoku, the aide to the governor on Physical Planning -Barr Chike Maduekwe and aide on Security, Chinedu Aniagboso among others.