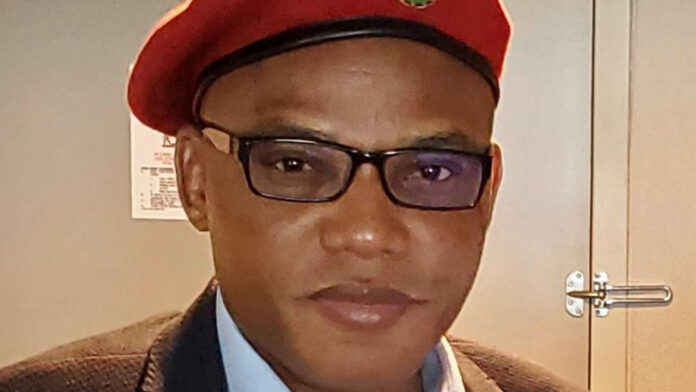 Now that the south east Govs have distanced themselves from the eastern security network, how can it work successfully without their support?

We never expected the governors to support Eastern Security Network. The governors are part of our problem because of their selfish interests. They are the ones benefitting under the current one Nigeria slavery.

But the truth remains that their dissociation from the security outfit is of no significance or consequence. ESN is the people’s movement. It doesn’t revolve around any governor or misguided political criminal masquerading as an elite. There is a saying in Igbo parlance that “Ootu Onitsha does not know that one person did not come to market”. So, we don’t miss the involvement of traitors and saboteurs like Southeast governors who are only after the interest of their Fulani slavemasters.

ESN is formidable, and can effectively operate without the involvement of any governor. The security outfit will flourish without the support of the governors in our land. I don’t think we can trust them. IPOB is the largest mass movement on the face of the earth. What would make it possible for any sane mind to think that  a bunch of criminals numbering a total of 11 will stop such a global phenomenon even with the help of their Janjaweed masters in the Sahel.

When will the network start working fully?

The Security formation has started full operation since the inauguration. They have shown their readiness in every forest and bush in Biafra territory. We do not operate in homes, cities or towns but in the bushes and forests where terrorists lurk to rape our mothers. After our leader Mazi Nnamdi Kanu inaugurated them on December 12, 2020 they have been active. Have you asked yourself what is responsible for the prevailing peace and security in the region this festive period despite the near absence of the corrupt Nigerian security agents on the road? This should be the first time in history when crime rate is at its lowest ebb in the region without Police and Army on the roads. The people can attest to this.

They need arms to fight kidnappers and other criminals with sophisticated weapons, which the FG won’t approve for you, how are you solving the problem?

ESN Security operatives do not need sophisticated weapons to defend Biafran land against terrorists although such are readily available should the need arise. Killer herdsmen, kidnappers and criminals who have been terrorizing our people understand that the game has changed for good. The will and determination of the people is all that is required. The morale of the men is very high, weapon or no weapon we are ready to die in defense of our ancestral lands. After all the Nigerian Army with its fabled sophisticated armoury are today capitulating before a rag-tag Boko Haram insurgent army and Fulani homemade bandits.

How many men and women are in the security network?

I don’t consider it appropriate to give details of the size of our security outfit until the appointed time. But we have enough volunteers to effectively defend every community in Biafra territory against invaders. I can authoritatively assure you that the days of Fulani herdsmen slaughtering Biafrans at will or destroying their crops with impunity are over. Such dastardly act is now a suicide mission! Our enemies understand this very clearly. Today ESN is ready to do that which the oppressive Nigerian government and our cowardly governors have failed to do.

What qualifications are needed to join?

Willingness to die in defence of Biafraland against local and foreign terrorists. It is a a volunteer force but it’s not like the absurdity  that obtains in Nigeria security agencies. Many of our men are graduates, some relocated from North America, Asia and Europe to be part of ESN. We have people of all stations and academic backgrounds. But what is paramount is that our men are highly trained and disciplined. We make sure they get the best of training required for the defense of the land of their ancestors according to internationally accepted standards and practice.

Do you use or have plans to use drones for effective monitoring of the region?

We don’t intend to publicly disclose our operational secrets but terrorists are no match to what is already on ground in Biafranland. We are always ahead of them and sponsors in Aso Rock. As I speak with you any movement by any of their so-called security agencies to look for or confront ESN will be identified before time and captured by our high resolution CCTV cameras scattered across the width and length of Biafraland.

How will the ESN personnel respond to the police or Nigerian Army when deployed to stop or confront them since the FG is against it?

First of all I want to correct the misconception about ESN in some quarters particularly among the enemy camp. ESN is not after Nigeria security agencies. ESN is not Biafran Army but a mere security outfit like Amotekun in the South West, and the Miyetti Allah National Security Network. The mandate of ESN is to protect Biafran land against terrorists, a responsibility which both the federal government and our governors have criminally failed to carry out. ESN is a child of necessity.

So, why should any sane security personnel come to look for the trouble of ESN? Let the Nigerian security operatives not make the mistake of engaging ESN in any confrontation because it will be deadly for all including the politicians instigating them. Somalia, Yemen and Syria are ready examples of government overreach. Those governors  calling for the Nigerian army to engage ESN will be the first casualities, them and their families. The Army, Police and DSS should face  Boko Haram, ISWAP and bandits terrorising the country. They should leave ESN alone to secure Biafra land against Invaders except they want to prove that the killings and rapes in our land have the approval of government.

If ESN is for security agents they know where to engage them. They are only after criminals and terrorists. Therefore, they don’t deserve any attack. If the security agents are not attacking Amotekun or the Miyetti Allah security network, why should they single out ESN for attack? The right to self defense is constitutional and inalienable. But should the federal government decide to go into confrontation with ESN, that will herald the end of civilisation as we know it in our part of the world.

Are they collaborating in any way with Amotekun in the south west? And in what ways?

One of the nightmares of the Janjaweed Fulani dominated federal government of Nigeria today is the new unity, understanding and cooperation between the South West and old Eastern region. The old narrative peddled to divide and subjugate our various peoples are fast changing. The present crop of youths in both regions including the Middle Belt is not like some of their more treacherous fathers.

Again, don’t forget that Afenifere was the first front line socio-cultural group to support ESN even before  Ohanaeze Ndigbo grudgingly offered theirs. South East governors and their likes are wretched cowards in the pocket of the caliphate. So, I can tell you that Amoteku and ESN can and will perfectly collaborate if and when the need arises. They have common agenda. Don’t forget that when Amotekun was formed and inaugurated our leader Mazi Nnamdi Kanu assured them that he was ready to send them 1million men to support them if they needed such help. We are working together to free our peoples from the British bondage called Nigeria criminally skewed to favour the Fulani hegamony which has since metamorphosed into terrorism and daylight banditry.