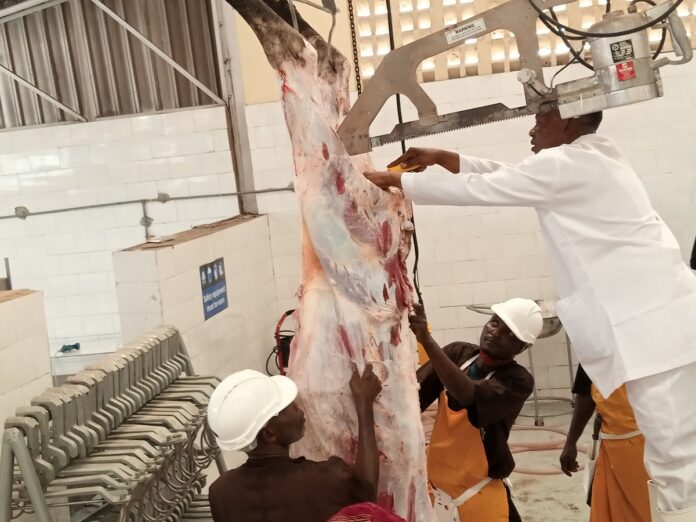 The Lagos State Government says it will establish a butchers’ academy in order to train new and existing butchers in global best practices around slaughtering in the red meat value chain in the State.

The State Commissioner for Agriculture, Ms. Abisola Olusanya stated this today at the test run of a new semi-mechanised abattoir for cow and goat under the Public-Private Partnership at Bariga area of the State.

Olusanya said that the academy would attract youths into the sector through the adoption of technology and in the process make them the next generation of butchers.

“We have what we call the butchers’ academy coming up where we want to train our existing butchers for them to see the best global practices around slaughtering.

“We want to start bringing in graduates and the youth to be the next generation of butchers but the only way to attract the youth into this sector is to have mechanized and semi-mechanized abattoirs.

“We cannot bring them into the traditional slaughtering on the slab which is not hygienic, wholesome and does not attract the right customers that will pay the margins and will make this sector attractive to people.

“The onus is on us as a government to ensure that we train our existing butchers and also to show the new butchers that this is the system we want to inculcate going forward and we believe that it is just a matter of time before that re-orientation sets in and everyone adopts this technology,” the commissioner said.

Olusanya said that there are 12 semi and full mechanised operational abattoirs in the state adding that some of them were setup through the public private partnerships.

“We need to understand also that having the kind of butchers that we have today and the mindset, they are traditionally entrenched in their way of doing things.

“The semi-mechanised line actually gives a sort of midway intersection and flexibility between what exists already and what we want to get to. So what we will be having going forward will be a mix of semi-mechanized and fully mechanized abattoirs,” the Commissioner averred.

She urged butchers to embrace technology in order to enrich themselves and make their work easier, faster and more profitable.

The Commissioner noted that semi-mechanised abattoir at Bariga would create about 2000 direct and indirect jobs when fully  adding that the aim of the partnership was to show Lagosians the need for safe, sanitised and hygienic slaughtering of meat.

“We are at the semi-mechanised abattoir in Bariga, which is a Public-Private Partnership between the Lagos State Government and a private player, Lion Unisco.

“This project has been in the fore for the last couple of months and we are here for an actual test-run with anticipation that we should have it operational by the end of the year.

“In the last couple of months, the state government had embarked on a sensitization programme on monitoring, enforcement and compliance to ensure that the illegal abattoirs and slaughter slabs are shut down.

“It is this kind of facilities that we are trying to promote,” she said.

Olusanya said that the state government is receptive to the idea of collaborating with the private sector participants to have facilities such as the Bariga abattoir with a view to ensuring the proper slaughtering of meat in a hygienic and wholesome manner.

“There is another abattoir in Badagry, Trans Selectal Abattoir coming up shortly by December also. All this goes to show that in terms of our reforms in the red meat value chain, we are very serious about changing the narrative going forward.

“We have seen the impact of COVID-19 and we have seen that there is a second wave in different areas around the globe and what this means is that, we as Nigerians need to take responsibility and begin to ask for safe and hygienic slaughtering conditions for the meat and food we consume.

“That is why we are seeing a trend now where a lot of our private sector players that we have entered into agreements with are also trying to speed up the completion of both the semi-mechanised and fully mechanized abattoirs,” Olusanya noted.