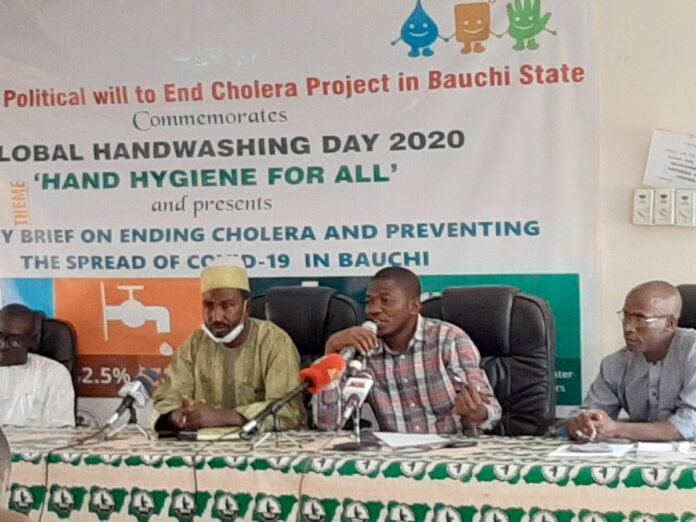 The  Coalition of Civil Society Organizations in Bauchi  State has explained that  the state has recorded a total of 39,795 cases of Cholera outbreak between 2010-2018 with 3.9 million people lacking access to combined water, Sanitation and Hygiene service in the State.

The Chairman of the Coalition, Mallam Chindo Sodangibi  stated this on Thursday during a press conference in commemoration  of the 2020 Global Hand washing Day at the secretariat of the Nigetia Union of Journalist NUJ in Bauchi. He said the commemoration of the day with the theme “Driving political will to end Cholera project in Bauchi”. organised by Women Development Association for self sustainance (WODASS) with support from WaterAid came at the right time in the right direction.

Sodangi said that Cholera remains a threat to public health with 1.3-4.0 million cases and 24,000-143,000 death recorded every yearly globally, adding that Nigeria accounts for a large proportion of the cholera burden in Sub-Saharan Africa as the disease is prevalent and seasonal, occurring mostly during the rainy season and often in areas that lack clean water and sanitation.

“The recurrent outbreak of cholera in Bauchi State is largely attributed to indiscriminate waste(solid and liquid) disposal, inadequate clean water supply with Bauchi metropolis and it’s environs, and poor hygiene practices.provision of safe water and sanitation among other things, is critical to controlling the transmission of cholera, ending the epidemic and other waterborne diseases” he said

Sodangi said that about 71.7% of the state population do not have hand washing facilities with soap, adding that 77% of the population uses traditional pit toilets, 13.5% uses poor flush, 3.6% uses water closet, 3.4  don’t use toilets whole 0.75% uses ventilated improved pit toilets.

The Chairman said ending cholera and preventing the spread of Covid 19 in Bauchi State requires a multifaceted approach, pointing out there is need for improved political will and proactive government action, a bleeding of surveillance, water and sanitation interventions, hygiene promotion and Social mobilisation and treatment use.

In order to ensure a cholera and COVID 19 free state,  the Chairman urged state government to ensure sustainable water, sanitation and hygiene interventions are provided in communities and LGAs with poor access to WASH services, scale up the clean family campaign to all LGAs across the three Senatorial zones of the state, domesticate the national WASH COVID-19 guidelines and implement the revised WASH policy and state action plan amongst others.