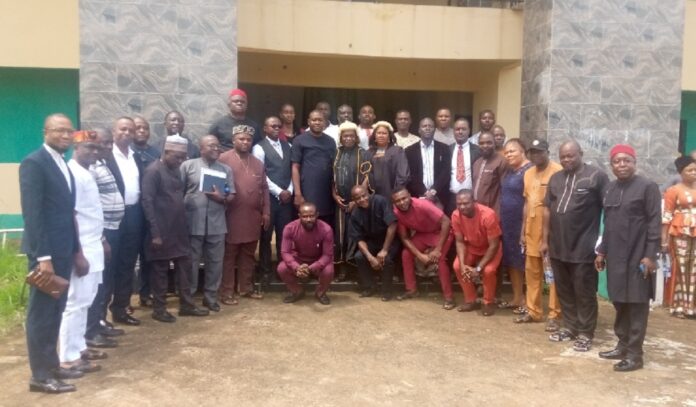 The Nkanu East Local Government Council, Enugu State, will give all necessary support to legislative initiatives aimed at boosting the rural economy, internally generated revenue, and the overall development of the local government area.

The Chairman of Council, Hon. Uchenna Nwobodo, stated this on Tuesday during a public hearing on a Bill for the Establishment of Nkanu East Mass Transit organised by the Nkanu East Legislative Council at the local government headquarters, Amagunze.

Hon. Nwobodo, who was represented by the Secretary to the Council, Hon. Cajetan Anichukwu, lauded the legislative initiative, which he said was in line with the rural development drive of the Government of Enugu State as well as the efforts of the Council to lift the leaving standards of the people.

“The Bill, when passed into a by-law will definitely give the Council the added impetus to expand the frontiers of infrastructural development agenda through the provision of Nkanu East Mass Transit.   It will offer us desired opportunity to create more dividends of democracy for the greatest majority of the people of Nkanu East”, he said.

In his briefing on the Bill, the Chairman of the Legislative Council’s Committee on Works and Transport, Hon. John Eze, said the Bill was informed by the need to find lasting solutions to the difficulties faced in the transportation of the people and palm produce in the Local Government Area.

In their various contributions, stakeholders such as the National Vice President, Public Transport Owners Association of Nigeria, Hon. Okey Mbah; former Secretary to the Enugu State Government, Dr. Gabriel Ajah, Youth Leader of the Enugu State chapter of the Peoples Democratic Party, Hon. Patrick Okoh as well as town union leaders, youth and women leaders, among others, commended the Nkanu East Legislative Council for the initiative and pledged to their total support to ensure the realisation of the lofty purposes of the Bill.

“Importantly, I must say that the people of Nkanu East are happy that our Legislative Council is running like a proper legislature, sponsoring Bills and motions that touch the lives of our peoples”, Dr. Aja added.