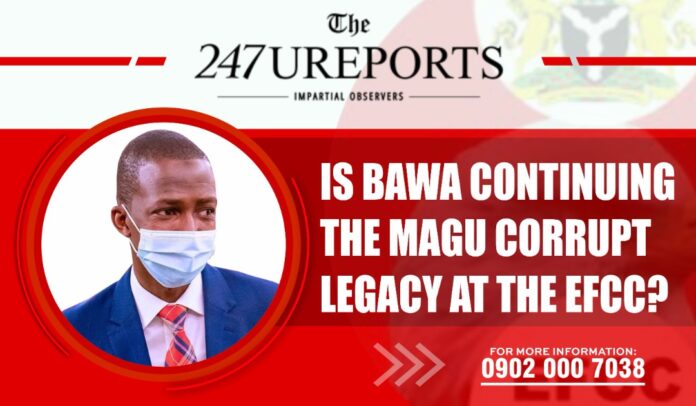 The battle against corruption in Nigeria under the leadership of President Muhammadu Buhari remains an elusive quest as the administration sails tumultuously into seven [7] years in office.

In particular the foremost antigraft agency, the Economic and Financial Crimes Commission [EFCC] set up to checkmate financial crimes within high profile persons in the country have had difficulties performing its duties. In some quarters, it is believed it failed to achieve its objective since its formation under the administration of the former President, Olusegun Aremu Obasanjo. And, the current leadership of the EFCC appears only to continue the legacy of corruption left behind by the previous leadership.

247ureports.com undertook a comprehensive investigation into the causative factors resulting in the inability of the EFCC to properly execute it duties as the foremost antigraft agency. The results are shocking and quite revealing – and points directly at the leadership of the Commission as the source of the rot. In the following weeks, the finding of the investigation will be published.

Information obtained from a consortium of sources reveal the EFCC have continued its descend into dirty corrupt practices in an unapologetic manner.

The federal government, it is recalled, had acted to sanitize the Commission through its unceremonious sacking/removal of the previous Acting Chairman of the EFCC, Ibrahim Magu who was deemed too corrupt and unfit to continue to occupy the seat of Chairman of EFCC. A presidential panel recommended his suspension following investigation into his [Magu] handling of the affairs at the EFCC.

Abdulrasheed Bawa replaced Ibrahim Magu as the executive national of the EFCC. He was nominated as substantive Chairman on 16 February 2021, and on 24 February 2021 was confirmed by the National Assembly as the Executive Chairman. As a caveat, he joined the EFCC as an Assistant Detective Superintendent (ADS) in 2004, and in October 2015 was appointed to head the commission’s investigations of Diezani Alison-Madueke, a former Minister of Petroleum Resources and her associates. As expected, the coming of the new 41year old national chairman brought hope and relief that the EFCC would become, for once, a functioning antigraft agency – where the corrupt associates of the former EFCC chairman would be ejected from the Commission – in readiness for a renewed beginning.

Unfortunately, the reverse was the case.

Nine [9] months after taking office, Bawa has appeared unable to sanitize the Commission. The corruption that had riddled the EFCC under the Magu leadership is allowed to fester under the Bawa leadership. The corrupt activities of “shakedowns” by EFCC investigators of alleged criminals have continued unchecked under Bawa.

One of the culprits who operated with the blessings of the former chairman, Magu is Hamma Adama Bello, a junior staff of Course 3 Regular – popularly referred to as Belloji. “An investigative officer”. Usually, investigative officers who work with the “special” blessings of Magu would apply unethical tactics to “shakedown” would-be financial offenders to collect unholy sums of money and properties in exchange for a slap on the wrist – or outright dismissal of the case after a supposed investigation.

As a junior staff of the EFCC, Belloji worked closely with Ibrahim Magu as Magu’s favourite investigator who was assigned to lucrative cases, in return for kickbacks. Bellonji is known to be notoriously corrupt. Operatives at the EFCC acknowledge Belloji to be very corrupt. “Everybody here knows about him.”

Belloji operated above his pay scale of a Course 3 Regular – which was much less than N200,000 monthly equivalent to N2.400,000 per annum. But he openly owned and drove a luxurious vehicle valued more than N50million – a Mercedes-Benz GLE.

During the tail end of Magu’s administration, Belloji ran into trouble – as about N3billion was discovered in his bank account in 2020. He had no reasonable explanation to the source of the money. As a favourite of investigative officer to Magu, the situation was handled privately and doused. “He keeps money for Magu”.

It also took the intervention of a former chairman of EFCC, Nuhu Ribadu to help cover up the situation. Apparently, “Belloji is a boy to Nuhu Ribadu.”

Information available to 247ureports.com indicates the current Chairman of the EFCC, Bawa is aware of the antics of the special investigative officer – and has continued to place him in charge of lucrative cases in the same manner Magu had done. Some source point to Bawa as having similar motives as his predecessor in posting him to lucrative cases.  It is recalled, in September 2020, an online publication – Peoples Gazette – in an exclusive report detailed how Bawa stole and sold dozens of petrol-bearing trucks confiscated from suspected looters, auctioning them off to his proxies at ridiculous prices while he was in charge of the Port Harcourt office of the EFCC. The report stated that Bawa was arrested and detained for several days by the then Acting Chairman of the commission Ibrahim Magu. Bawa was subsequently relieved of his position in Port Harcourt and transferred to the agency’s training school in Abuja. But on 17 February 2021, the EFCC issued a statement denying reports that Bawa was arrested and detained by the agency under former Chairman, Ibrahim Magu.

The same Belloji who the current EFCC Chairman adopted from Magu as a favourite detective is reported to have been in the company of Ibrahim Magu is his infamous trip to Dubai with the embattled Reverend Omale in May 2020 – where the Reverend was alleged to have been used to launder money for the now sacked EFCC Chairman, Ibrahim Magu. A property worth billions of naira was reported to have been purchased in the process under the name of the Reverend – this is according to the presidential panel headed by Justice Salami.

An interesting thing happened, as the presidential panel launched its investigation against Magu, many of Magu’s favourite detectives were reported to go into hiding – in preparation to take a flight to escape being exposed and/or arrested.

In the case of Belloji, “I think they said he did a runner at one point. To do a runner means to leave a place quickly in order to avoid a difficult or unpleasant situation. I think he was running away because there was a quarrel between himself and another colleague and the person planned to exposed . He wanted to run from the country. Those that knew him say he wanted to run away from the country.” – stated a source knowledgeable of the goings on inside the EFCC.

The source continued, “And there were talks that anyone close to Magu will be exposed alongside him. But what really made him want to run was that he had a squabble with one colleague – Osas Ozananor – a Course 2 staff who was also his friend before and they shared the illegal proceeds together. And someone who knew him that well also had documents and evidence that could be used against him.”

The spokesperson for the EFCC, Wilson Ewujaren was contacted to explain why Belloji continues to remain on the employ of the EFCC. And why he remains one of the favourite investigative officers to the current chairman. He did not respond.

Aside from the apparent continuation of the corrupt legacy left behind by the former EFCC Chairman, the corrupt environment of the Nigerian system appears to engulf the new EFCC Chairman into handicapping his administration from effectively executing duties. Presently, financial agencies and parastatals of the federal government – such as the Central Bank of Nigeria [CBN], Federal Inland Revenue Service [FIRS], Nigerian National Petroleum Corporation [NNPC] and other federal ministries have adopted a practice of safeguarding themselves against EFCC’s investigative officers. 247ureports.com investigation uncovered how the heads of parastatals and ministries reserve top employment slots for the chairman of the EFCC – in so doing, the EFCC eagle eye will be moved away from focusing on the said ministry or parastatal. Under the leadership of Bawa, the practice is reported to have increased to record levels.

In effect, these federal entities use the employment slots as “bribes” – to the head of the EFCC without consequences.

During the Ibrahim Babangida administration, Tam Daivid-West was jailed for accepting a cup of tea and a wrist watch from would-be consultants to the federal government.

According to the details of the report published by Cable Online Newspaper, “Tam David-West was tried by the Babangida regime for drinking tea with the executives of a firm, which the regime claimed compromised the ex-minister of petroleum in the process. The regime made reference to a $57million contract between Nigeria and Stinness oil company, in New Jersey, United States of America. The deal, which was made during the era of ex-President Shehu Shagari but negotiated during the Buhari military era, landed David-West in a “huge mess”. The Babangida regime accused Tam David-West of “trading off the country’s interest” for a cup of tea and wristwatch, which was linked to the proceeds of the $157 million offshore processing contract with Stinnes Oil Company. The contract, which involved exporting crude oil from the Nigerian National Petroleum Corporation (NNPC) for refining and sales outside the country provided revenue for both Nigeria and the company. However, an outstanding $157 million payment came up after the Shagari government fell, which made Buhari mandate David-West to negotiate a deal.“