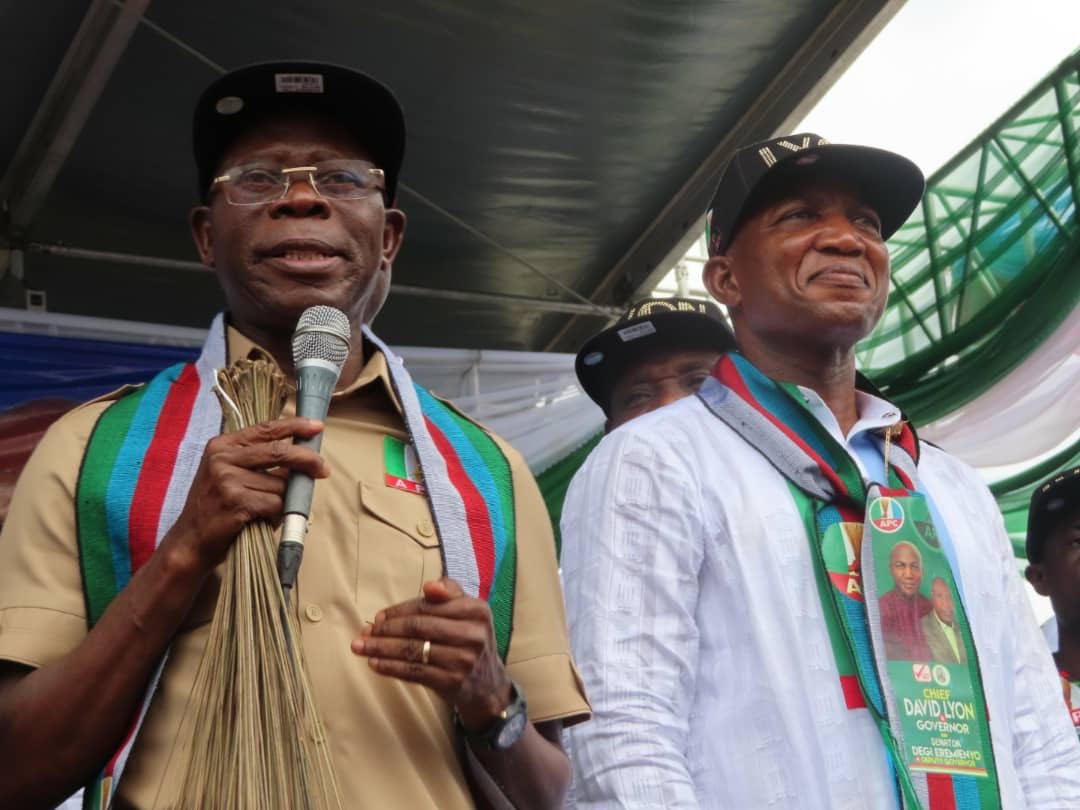 Speaking at the grand rally of the party held at the Oxbow Lake Pavilion in Yenagoa, the APC leadership mocked the PDP led administration for failing the state.

National Chairman of the party, Adams Oshiomhole, said the heavy defeat that awaits the PDP come Saturday is now causing panic within the Dickson camp.

“When you are been accused of spending almost a N100 billion to construct less than three and a half kilometers runway but nothing is running, and there is no way and you go there with your pajamas and you are crying and you want them to open the airport and the Lion is coming to ask you to account, won’t you panic?”

“So, I think Governor Dickson deserves our sympathy. But the best he can do is not to complicate his own problem by resorting to violence. It will not help me, it cannot take him more and he cannot survive it. Let me say here and now, we believe in one man, one vote, one woman, one vote, one Dickson one vote, and of course one Lyon one vote. With the votes we already have Dickson belongs to history. He has mismanaged not only the governance of Bayelsa State, he has mismanaged the Bayelsa family as a people”.

“He saw power as something that intoxicates, nobody else matters, every body was to serve him even those who have held senior national positions that helped him to where he is today. He thought the Okra tree could be taller than those who planted it. But come Saturday November 16, he will know the truth that the Okra tree cannot be taller than the person who planted it.

“That leads me to why we are here. You see, if you hear of Lion when you see him, his looks, the way he speaks, for those who understands psychology, you will see a harmless, humble gentleman, when they tell you this is a Lion you have to touch him to know the difference”.

“You know like they say, it is the empty drum that makes more noise. The Lion has grown up in this community, he has experienced what the ordinary Bayelsans have experienced. He knows the true meaning of poverty, he understands how poverty dehumanizes. He has struggled against forces of reaction, he is an example of what is possible when a man is focused.”

“Today, I believe that the people of Bayelsa State by coming out on Saturday to vote for one of your own, you will be making a bold statement that indeed this democracy that anybody who is focused who is determined, who remains with his people, mix with people and community, who empowers ordinary people, when he is out for change you will support him”.

“Dickson will soon find out that democracy is an equalizer. When you think that you are bigger than anyone, on election day you will discover that the unemployed, the deprived, the abused, the deceived on that day they are all equal. So I asked you that on Saturday that you will show more enthusiasm even much more that you have shown before. On Saturday, you must go out and vote, we do not believe in violence, not by bullet but by PVC. Dickson and his agents will be voted out and Lyon and his running mate will be voted in”.

“Let me assure you that President Muhammadu Buhari is fully here with us in spirit. He says he will give Lyon all the support he needs to make up for lost time. The President is pained. President Buhari gave Dickson, like other governors, bail out number one to go and pay salaries but Dickson collected the money and the workers were not paid. He gave the second one and he paid his family. Dickson got the refund of Paris Club, monies that were deducted from the tenure of his predecessors. It was refunded to him in billions, Dickson took it and Bayelsa is under darkness. To hear that for a state like Bayelsa with the revenue that accrues to you that even civil servants are not paid after all these monies have been released, even if you don’t punish him, your ballot papers will punish him.”

“He who climbs power and destroys the ladder that he used, will you be able to come down? So I ask you to join me in this prayers: Oh Lord, we the people of Bayelsa State eight years ago, we came to vote for a man called Dickson, we trusted him, we believe in patience, our leaders who we trust ask us to vote for him, in our innocence we give him, four years later we had mixed feelings, we were told give him second chance that he will repent from his sins and he will take Bayelsa to the next level, Lord it is eight years he has mortgaged our future, he borrowed from all the banks in Nigeria in the name of only one project and even that project is not on. Lord, we know we trusted him, now with you we are powerful”

Earlier, the Minister of State for Petroleum Resources and leader of the party in Bayelsa State, Chief Timipre Sylva, who spoke in a veiled reference to the judgment against the Senator Biobarakuma Degi-Eremienyo, running mate to Lyon accused the PDP of throwing all kinds of obstacles on the way of the opposition in the state, but said that the party was too strong to be weakened by such antics.

“They have gone to every court in the land to try and discourage us. But the APC is stronger and more powerful than they think” he said.

In his remarks, an elated Chief David Lyon expressed gratitude to Bayelsans for their support promising better days ahead if elected governor.

“Today, the people of Bayelsa State have spoken, for almost eight years just barely two months to leave office, PDP has been ruling this state in darkness. Let me assure you that I know what is development, I am somebody who is close to you and I want to assure Bayelsans, November 16 after being elected and sworn in on February 14, 2020, Bayelsa will see development.

“APC is not coming to decieve you people, no. Let me tell you that this election is not about David Lyon, it is about Bayelsa State, so let us stand firm to vote PDP out of this state.

Earlier Governors Badaru of Jigawa and his Osun State counterpart, Gboyega Oyetola, had in their separate remarks, urged the people of the state to come out in their numbers to vote for the APC on Saturday, and join the league of progressive states.