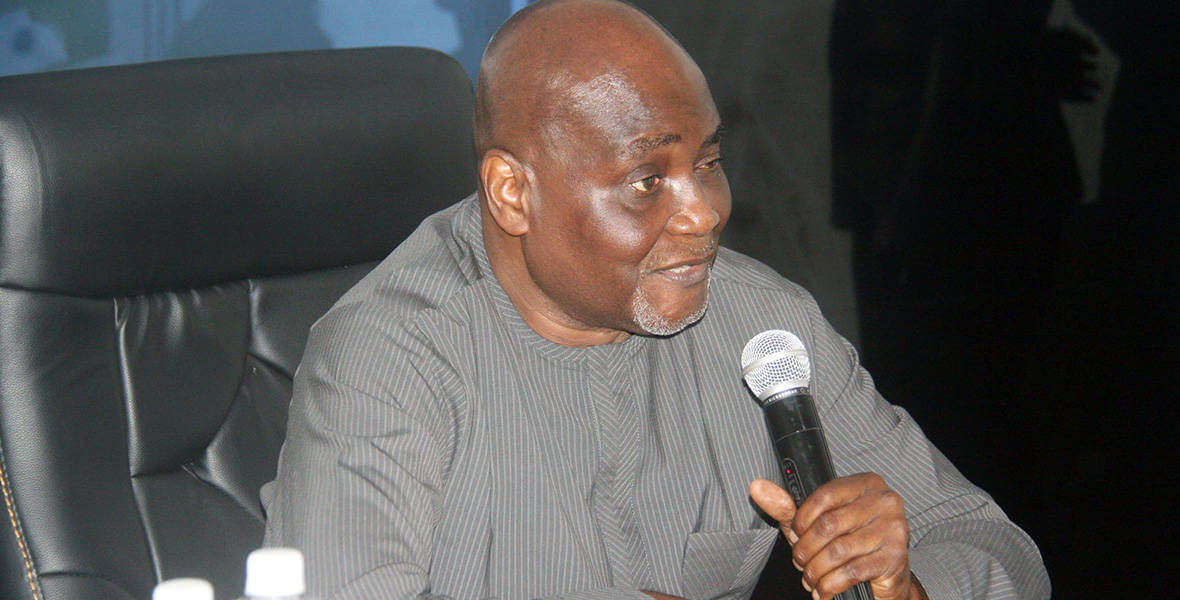 On Thursday, September 26, 2019, the social media was awash with a report published by an online portal, PointblankNews, alleging that the Coordinator, Presidential Amnesty Programme, Prof. Charles Dokubo, paid a sum of N1.6billion to a contractor for supply of 400 wooden canoes for a women empowerment programme. It further claimed that the unit cost paid for each wooden boat was N4million, far above a market price of not less than N200, 000.

For the management and staff at the Amnesty Office, the report which was published barely a day after the Amnesty Programme under Prof. Dokubo celebrated its latest achievement with the flag-off of a phased empowerment exercise for 400 rural women in coastal communities of the Niger Delta, was not a surprise.  This is because in pursuit of the ignoble agenda of its paymasters, PointblankNews has become notorious for blackmail and promotion of fake news on the Amnesty Programme and Prof. Dokubo.

We had ignored several injurious falsehood concocted and peddled on the social media, but have decided to straighten the records in view of the fact that consistent falsehood could be taken for the truth by undiscerning members of the public. This is more so, as Pointblank News has crossed the borderlines and stressed its mission of discrediting Prof. Dokubo and the Amnesty Programme to a nauseating level.

This is outright falsehood as no such amount was paid to any contractor for supply of wooden boats. First, the scope of contract for the empowerment of 400 Niger Delta rural women in coastal fishing awarded to Innotek Royal Services Limited as specified in the terms of reference, covered cost of a one-week refresher/entrepreneurial training to prepare the beneficiaries for effective management of their businesses. This includes cost of training, accommodation, feeding, and logistics for one week.

At the rate of N4million per beneficiary which is the benchmark for empowerment in the Amnesty Programme, the amount also covered cost of consultancy services for registration of business name for the beneficiaries; tax papers, bank account opening, land acquisition for each beneficiary; provision of preservation and storage facilities, branding, mentoring/monitoring of beneficiaries in their business locations for a period of three months, and comprehensive documentation of beneficiaries of the empowerment in preparation for exit from the Presidential Amnesty Programme.

Apart from the above, the N4million cost of empowerment for each beneficiary in the rural women coastal fishing programme also includes provision of a package of modern starter packs to the beneficiaries. To this end, the fishing boats built and supplied by Innotek Royal Services Limited, are not wooden canoes as mischievously reported in the social media, but products of modern fibre technology.

The implementation of this contract opened a new chapter of achievement for the Presidential Amnesty Programme as some of its beneficiaries who had been trained in polymer science/technology and offered employment at Innotek Royal Services Limited, were among the workforce that constructed the modern fibre fishing boats at its factory located along DSC Expressway, Otokutu, Warri, Delta State (please see verifiable evidence in photos).

Contrary to the claim by PointblankNews that a sum of N1.6billion was paid to the contractor for 400 wooden canoes, the Presidential Amnesty Programme has ONLY PAID 15 per cent of the contract sum for 100 MODERN FIBRE boats all equipped with a Yamaha 8 horse-powered outboard engine; fishing nets, fishing hooks, life jacket, life rings, and fire buckets, which were distributed to 100 women in the first phase of the empowerment programme for rural women in coastal fishing.

We wish to also clarify that the contract awarded to Innotek Royal Services Limited for empowerment of 400 rural Niger Delta women in coastal fishing is to be implemented in phases, and the recent exercise in Warri where starter packs were given to 100 women is just the first phase of the programme. Therefore, the allegation by PointblankNews that only 100 wooden canoes were presented after Prof. Dokubo spent a sum of N1.6billion in purchasing 400 canoes is a barefaced lie. It is also important to state that in the implementation of this contract, the Presidential Amnesty Programme did not allocate more than 100 women to the contractor for the first phase of the empowerment exercise, and nothing more than 15 per cent of the contract sum has been paid.

A day earlier, the online portal reported that Prof. Dokubo pocketed a sum of N1.1billion inserted into the 2019 budget of the Presidential Amnesty Programme. It alleged that no vehicle worth the amount was purchased, but the funds had been looted by Prof. Dokubo and his cronies.

The fact is that there is no iota of truth in this allegation as such amount was neither budgeted nor approved for purchase of project vehicles. The truth is that the National Assembly approved only a sum of N400million in the 2019 budget of the Presidential Amnesty Programme for purchase of additional project vehicles for which requisition has been made and the Amnesty Office is presently taking delivery of the vehicles.

PointblankNews had on September 20, 2019 published with glee what it classifies as usual, as an exclusive report of a covert investigation by the United States Federal Bureau of Investigation (FBI) on Prof. Dokubo and his unidentified kinsman over money laundering, racketeering in the sum $10.5billion and N1.7billion in safe keep at Gregory University, Uturu, Abia State.

It claimed that the unnamed kinsman of Prof. Dokubo resident in the US whose undisclosed bank account was flagged after huge sums were lodged on different dates, named Prof. Dokubo as the source of the funds and also listed properties allegedly bought for him. The online portal further claimed Prof. Dokubo confided in one of his close aides that Prof. Gregory Iyke Ibe, the founder of Gregory University, has over N1.7billion in cash in safe-keep for him. It also claimed this was in addition to a sum of N200million Dokubo paid Prof. Ibe for an undisclosed reason.

We wish to state that this is the biggest lie of the century published by PointblankNews and circulated in the social media as Prof. Dokubo is NOT under investigation by the FBI, neither was he linked to money laundry by anybody in the United States. He is neither wanted nor linked to any criminal offence in the US. The authorities at Gregory University reacted promptly to the fallacies in a statement dated 18th September, 2019, in which it dismissed the report as malicious, scandalous, ludicrous, unfounded and a figment of the writer’s warped imagination. Gregory University demanded immediate retraction of the publication by the publishers of PointblankNews within 48 hours or risk litigation.

The allegation that Prof. Dokubo has acquired massive properties is standing truth on the head. He is a humble and modest man who, rather than amassing public funds, has exhibited genuine commitment to impacting positively on the lives of the Niger Delta people. He has no such properties anywhere and those making the allegation should provide proof. It is a fact that even in Abonnema, his hometown; Prof. Dokubo has no residence of his own and still lives in a family house.

Recently, the online portal had also celebrated an “exclusive” report that Prof, Dokubo had fled the country to the United States “after being implicated in an N23billion looting under the cover of the National Security Adviser, Gen. Babagana Monguno”, who it alleged, was his godfather.

It claimed the presidency had asked Prof. Dokubo to prepare his hand-over notes and hand over to the most senior civil servant in the Amnesty Office, but the NSA advised Prof. Dokubo to escape the prying eyes of security operatives and go into hiding in the US. It turned out to be an unfortunate outing for the purveyors of fake news who were unaware that Dokubo had returned to Nigeria on the day the “exclusive” was splashed on PointblankNews. As a face-saving measure, the publishers deleted the report from the news portal same day to befuddle undiscerning members of the public, in a clear case of mischief.

On Sunday, September 29, 2019, PointblankNews went to town with another exclusive that Prof. Dokubo bribed the NSA, General Monguno (retd) with a sum of N700million to save him from the reports of fraud published on the Amnesty Programme. It also claimed that staff of the NSA’s office were given $100,000 to write security reports clearing Dokubo. These are pointblank lies sponsored and recycled overtime by self-styled leaders of the Niger Delta who hold the erroneous belief that the Amnesty Programme is their source of livelihood. It is unfortunate that the publishers of PointblankNews have gone a step further by dragging the names of respected top government officials in the mud, in a desperate bid to get at Dokubo.

This is a dangerous and wicked lie calculated at portraying the NSA in bad light and inciting him to denounce or severe his cordial supervisory relationship with Prof. Dokubo. General Monguno is a highly respected, disciplined and incorruptible military officer with impeccable and enviable records in a career that spanned over three decades. He abhors corruption and cannot encourage fraudulent practices.

Since the appointment of Prof. Charles Dokubo as Coordinator of the Presidential Amnesty Programme in March, 2018, some persons claiming to be leaders of the Niger Delta had resolved to throw a spanner in his works. They’ve not relented in firing from all cylinders of their arsenal using PointblankNews as the launch pad for a smear campaign on Prof. Dokubo for initiating reforms which obstructed their flow of illicit funds. For this, they are working ferociously to wreck the boat by sponsoring subversive activities, crime and violence in the Niger Delta region, and the ignoble resort to character assassination.

That is why PointblankNews has become the only online portal amidst hundreds in the cyber space with ‘scoops’ on Prof. Dokubo and the Amnesty Programme almost daily, recording an unmatched feat in the art of mischief and propagating fallacies with seven ‘exclusive reports’ in just one month (September 2019). Unfortunately, all are wicked lies concocted and spread on the social media by those on whose toes Prof. Dokubo had stepped on, in their unbridled quest to pocket funds at the Amnesty Programme meant for beneficiaries of the Programme and the Niger Delta people.

Prof. Dokubo has been able to sustain and deepen peace in the Niger Delta as a result of prompt and consistent payment of monthly stipends for the ex-agitators, payment of fees and other allowances of beneficiaries of the Amnesty Programme on scholarship, training and empowerment of beneficiaries, and several other laudable initiatives including the construction, completion and activation of vocational training centres to fast-track the reintegration process for ex-agitators.