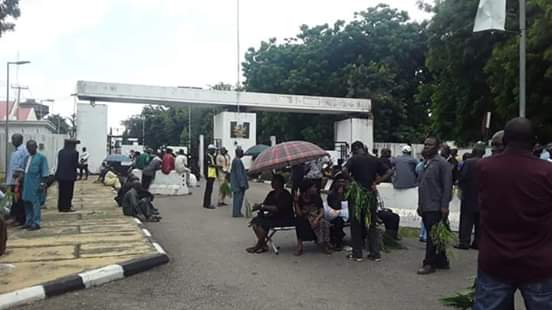 Pensioners in Benue state has locked down government House in Makurdi, in protest, demanding the payment of 25 months arears of amounting to over N25 Billion.
The “Concern Pensioners”, an off shoot of Nigerian Union of Pensioners, (NUP), Benue Chapter, last week, issued a notice to the Benue State Government that they will be embarking on indefinite peaceful protest today, Wednesday, 4th September, 2019
Today, however, they barricaded the government house gate at about 12 noon, preventing vehicles from moving in or out.
The senior citizens trekked from High Level area in Makurdi, the state capital, about five kilometers to get to government house, chanting solidarity songs. While some carried their mats and pillows under their armpits, others carried placards with various inscriptions; ” Ortom Pay Us Our 25 months Pension Arrears and Gratuity. Enought is Enough”, among others.
The Chairman of the group, Mr Peter Ikyado said the strike is indefinite and  they will stay at government house gate until the monies owed them are paid.
He explained that the 25 months arrears owed to them stretched “Right from Suswam administration, three months in 2015 and the rest by this government.”
He noted that “the constitution demands, that when allocation comes, we are supposed to be paid first because we are on first line chart.
“During the time of Akume, we were paid first, during the time of Suswam, we were paid first but this government spontenously, deliberately, has refused to pay us. They will pay the civil servants and leave us.
“We have continued to write letters upon letters and our people are dying. No money, no drugs. Akpu that dogs cannot eat, pensioners are begging people for it Benue. What a shame. 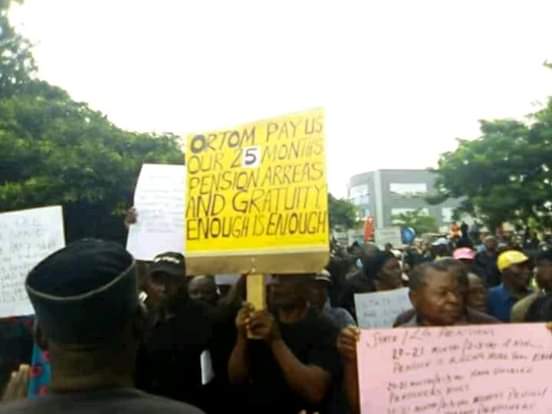 “We are senior citizens and our motto said enjoyment after retirement by here, it is suffering after retirement. We are not regarded here. But this time, this strike is indefinite. Our mats are here with us and we will not leave until our demands are met.”
Ikyado said they had met with the Deputy Governor, Benson Abounu earlier in the week, who pleaded for one month grace until the governor return from a journey.
“But we gave them a condition that we are hungry. Pay us one month to enable us buy food. Monday, Tuesday Wednesday, no alert. We cannot wait with hunger”, he said lamenting that over 500 pensioners in the state have died due to malnutrition and lack of drugs.
Other pensioners, Augustine Onah and Micheal Agom urged government to pay them their arrears saying they equally voted the present government into power and should not be abandoned.
As at the time of filing this report, no government official has come out to address the pensioners and the commissioner for Information, Mrs Ngunan Adingi could not be reached.