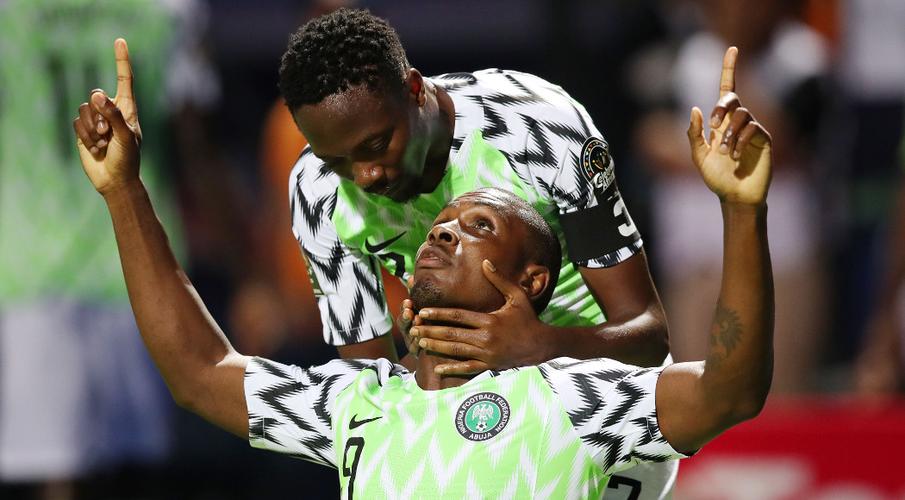 Odion Ighalo came off the bench to score the goal that gave former champions Nigeria a 1-0 victory over stubborn minnows Burundi on Saturday in the opening Africa Cup of Nations Group B match.
The Shanghai Shenhua forward had been on the pitch only four minutes in Egyptian Mediterranean city Alexandria when he struck the 77th-minute winner.
It was an unconvincing performance from the three-time trophy-holders, who lacked attacking sharpness against well-organised opponents.
Bookmakers have made Nigeria fourth-favourites at 9/1 to win the competition, behind hosts and record seven-time champions Egypt, Senegal and Ghana.
Debutants Burundi battled bravely throughout before a small crowd that included four-time African Footballer of the Year Samuel Eto’o from Cameroon, one of the tournament ambassadors.
Burundi, who qualified at the expense of a Gabon team including Arsenal star Pierre-Emerick Aubameyang, lie 89 places below Nigeria in the world rankings.
But they showed no signs of inferiority during the opening half in the ancient city and came closest to breaking the deadlock during the first 45 minutes.
Cedric Amissi darted on to a brilliantly weighted pass and it took a brave parry from perfectly-positioned Nigeria goalkeeper Daniel Akpeyi to prevent a sizzling close-range shot finding the net.
The close shave came just after beanpole Nigeria forward Paul Onuachu had displayed his aerial prowess to force a good save from Jonathan Nahimana.
Nigeria, back at the Cup of Nations after failing to qualify for the last two editions, dominated first-half possession as anticipated but seldom threatened to score.
The Super Eagles fired blanks in two warm-up matches, a draw with Zimbabwe and loss to Senegal, and German coach Gernot Rohr expressed concern ahead of the Burundi clash.
“Players like Alex Iwobi need to score more regularly,” he said, referring to the misfiring 23-year-old Arsenal forward.
Iwobi was well policed by a Burundian side known as the Swallows, who were enjoying their debut at the African football showpiece.
Kenneth Omeruo, one of two survivors in the starting line-up from the Nigeria team that won the 2013 Cup of Nations, came close soon after halftime with a header off a free-kick.
As the hour mark approached, Rohr took off veteran captain John Obi Mikel and introduced Ahmed Musa, hoping the pace of the wide attacker could unlock the Burundi defence.
Ighalo, the leading scorer in the qualifying competition with seven goals, later replaced Onuachu and soon broke the deadlock.
A superb pass from Ola Aina set up Ighalo to fire past the onrushing Nahimana and the ball landed in the far corner of the net.
Guinea face Madagascar, another of the three teams debuting at this Cup of Nations, in the second Group B fixture at the same venue later Saturday.

KALU ‘STABLE’
Nigeria forward Samuel Kalu is in a “stable condition” after collapsing during training due to dehydration, the Egyptian Football Association said, amid a sweltering start to the Africa Cup of Nations.
“The health situation of Nigeria’s player Samuel Kalu is stable after undergoing the necessary medical tests following his fall during his team’s training due to a heart muscle failure,” the Egyptian FA wrote in a statement.
The Bordeaux player was suffering from “dehydration after losing a large quantity of fluids” on Friday, it added, before stating that Kalu “is in a stable condition and can play” against Burundi in Alexandria on Saturday.
It is the first time the tournament is being played across June and July, with temperatures in Egypt expected to hover between 35 and 38 Celsius (95-100.4 Fahrenheit) over the next month.
All matches will feature three-minute heat breaks, taken in the 30th and 70th minute, due to the extreme heat with water and cold towels provided for players and officials.