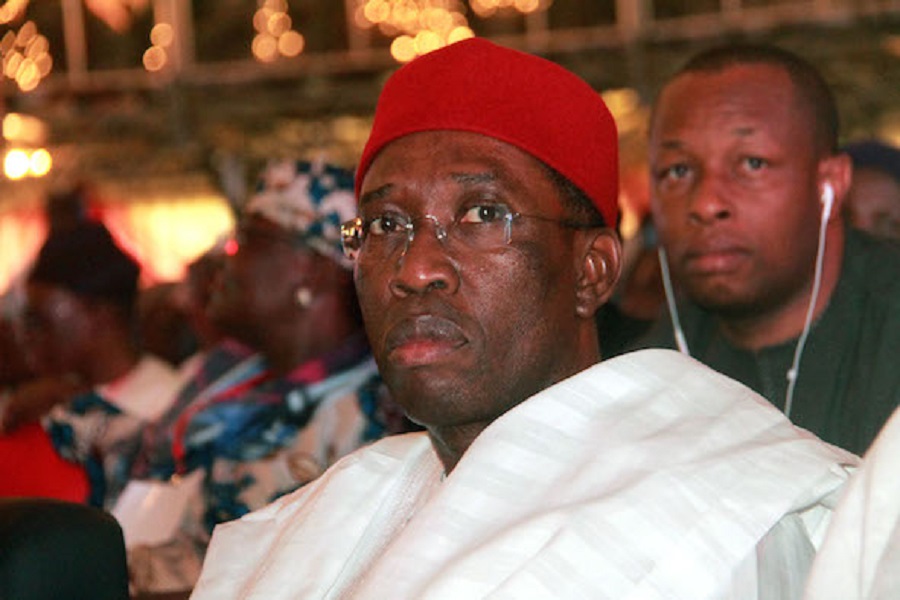 To divert the attention of Nigerians particularly Deltans from the underground fraternity between the ex-convict governor of Delta State, Chief James Onanefe Ibori, the seating governor, Senator (Dr) Arthur Ifeanyi Okowa who happens to be his political son has boycotted the N350 million Church Thanksgiving and Reception organized by Okowa’s administration who recently returned to Nigeria after serving a jail term in London for money laundering and corruption.

Okowa who has clampdown on some persons in Uduaghan’s cabinet, sponsoring mass protest against Uduaghan, side-lined Ibori’s men in his government and many more sins against his predecessors may have seen the handwriting on the wall.

The thanksgiving service which started about 10am at the First Baptist Church, Oghara, headquarters of Ethiope West local government area of the state has in attendance immediate past governor of the state and Ibori’s blood cousin, Dr Emmanuel Uduaghan, immediate past Secretary to the State Government, Comrade Ovuozourie Macaulay, former Police Affairs Minister Mr. Broderick Alaowie and his wife Mrs Broderick Bozimo, Senators Emmanuel Aguariavwodo,  Patrick Osakwe, Okowa cabinet members and traditional rulers, among others.

observed that Governor Okowa was conspicuously absent from the church service but was represented by the Secretary to the State Government Mr. Festus Ovie Agas, however, an official of the state government disclosed that Okowa decided to stay away so as to pretend that the state government did not fund the jamboree celebrating a man who was jailed in the UK for looting the state treasury.

Impeccable sources in Okowa’s administration said the N350 million was released for the event, adding that though the governor might still attend the reception, slated for later at Ibori’s mansion in Oghara, sources, however, stated he was advised to stay off both events to avoid suspicion.

Meanwhile, Ibori who spoke publicly for the first time since his return from the United Kingdom (UK), where he served a 13-year jail term for money laundering, a former governor of Delta State, James Ibori, has insisted that he is not a thief.

Ibori, who spoke at his thanksgiving service organised in his honour by the Delta State government at the First Baptist Church, Oghara in Delta State, maintained that the persecution he suffered was aimed at separating him from his people.

Switching between Urhobo and English languages while addressing the congregation, Ibori said, “Today, I have decided to speak for myself, I am not a thief. I cannot be a thief. Today is the day they say I should give testimony to God. For those that know me, you know that my entire life is a testimony itself and I have said it over and over again that my life is fashioned by God, directed by God, sealed, acknowledged and blessed by God and I believe that since the day I was born.

“Like Archbishop Avwomakpa said, when this whole commotion started, what was most painful to me was the pain and suffering that my people were going through. What I went through has nothing to do with me as a person because for some reasons, like I said to you, I drew my strength from God and somehow, I knew that God would stand by me.

“I knew that one day, this day would come. I am indeed very pleased that I can now stand before you and look at your faces, faces that I have missed and those of you that have indeed suffered the pains of my absence. It has nothing to do with me.”

The former governor, who was decked in Urhobo traditional attire, continued, “So, when I reflect, it gives me joy that all your prayers, God has answered, all your support and solidarity for me all through this period, it is indeed not what I can begin to say. Like what our former chief of staff, Francis Agboroh, said ‘it is unthinkable’.

“If I am to give testimony of my journey you will not leave here. The only testimony that I have is the fact that I am back and alive in your midst. And again, I say that I never had any doubt in my mind that I would get back home. When I looked at how things were going, I discovered that they wanted to separate me from you people. They wanted me to go to the corner where I won’t be seen.

“That’s how I see it. …I am happy to be home with my people. There is nobody that can battle with the Lord. An Urhobo adage says there is time for everything (okemutie). A day will come when I will tell my story and every one of you will hear me. Today is to thank God.”

Ibori arrived the venue of the thanksgiving at about 10:30 on Sunday morning after the praise and worship service had commenced amid tight security.

In a brief remark at the service, the traditional ruler of Oghara Kingdom, HRM Orefe III, disclosed that the thanksgiving was held to celebrate Ibori who had returned from the UK alive and in good health.

“What we are witnessing today started since last year when we heard that our son would soon be freed. Oghara is blessed with a big son in whom we are well pleased. Our son has put Oghara on the world map. We lost our son at a point but we are happy that he has returned and we are rejoicing.”

“He (Ibori) is somebody who respects his kingdom and his monarch. We must continue to pray for him because he has touched many lives,” the monarch said.