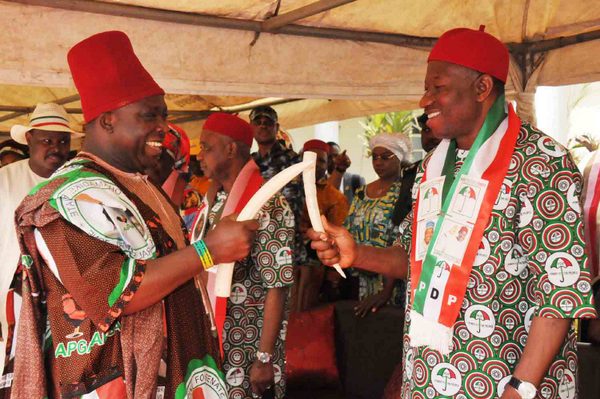 So many positive reasoning have been used by different groups seeking the votes of Ndi Anambra Central in the coming Senatorial election to vote for APGA and our candidate Chief Sir Victor Umeh OFR, Ohamadike Ndigbo.

Some plead with Ndi Central and Ndi APGA to settle Ohamadike with the Senate because he has suffered so much for the party, others see him as going there to speak for us. All these reasoning are well intended but permit me to take it a little bit further, permit me to explain to all of us the reasons why Ohamadike is going to the Senate.

None of us is a stranger to the politics of this nation as it is today. In Imo, Abia, Ebonyi, Enugu and Anambra States we are very conscious of the fact that we are nowhere in the politics of Nigeria.

We are in deep trouble because of our inept calculations and selfish decisions. Nigeria used to stand on a tripod, Hausa, Igbo and Yoruba, today, it is Hausa and the Yoruba, Igbo is nowhere to be found. Other minor ethnic groups have risen and taken better positions than the Igbo nation today in the central politics of Nigeria.

Our visionless, selfish, wicked and greedy leaders sold off credibility and ability for mediocrity. Other ethnic groups in this nation are busy sending their BESTEST eleven, Ndigbo have been busy sending half baked individuals and empty vessels because we do not want credible people to rise and question our authorities. The personal interests of our leaders have been put ahead of our collective interest as Ndigbo, we have been suffering the consequences for too long.

As it is today, the Igbo nation has fourteen Senators that have been speaking for us, Ohamadike has a duty to get everyone on one page first of all to understand that we are all in the Senate for one purpose, the purpose of not just to attract the dividends of democracy to our Constituents but most importantly to raise the values of Ndigbo back to our original tripod position. This is definitely not going to be an easy task. Some of our owns will resist, some will blackmail him in fear of wanting to usurp their positions. Of course as an Anambra man, the opposition will be tough, Anambra man again as always wanting to lord it over others. Ohamadike has got to find a way to deal with all these, sorting the problems from within and reassuring the Senators that he does not mean any harm rather than the interest of the Igbo nation. This is fundamental for the rebirth of Ndigbo with one voice in Nigeria, Ohamadike must not be the voice.

Ohamadike is not seeking to go to the Senate for just political dividends to the Central or to be called Distinguished Senator, Chief Sir Victor Umeh will be going to the Senate with the burden of how to reintegrate the Igbo Nation back into the Nigerian political centre.

Ohamadike is going to start a new phase of sleepless nights, political meandering, how to meet up with the level of belief that Ndigbo already have of him.

Ohamadike Chief Sir Victor Umeh equally has the burden of supporting the Government of Willie Obiano in raising our voice at the centre so that we do not keep suffering in silence. As it is today, the Federal Government is owing us over 34 Billion naira in refunds of Federal Government projects undertaking by the State. Akpokuo needs a matching voice and legwork in Chief Sir Victor Umeh in getting the attention of the centre to refund us so that Akpokuo will keep working. We need some kind of relief in delivering, asking and fighting for the interest of Ndi Anambra at the centre.

It will not be an easy task but being Ohamadike Ndigbo, he has an established pedigree and standard that we latch our hopes on, no matter how tough it may turn out to be, we are sure of our own Ogbunigwe, Chief Sir Victor Umeh.

As Anambra Central goes to the polls on Saturday the 5th of March, the expectation of all concerned Igbos is that we must encourage all our friends and relations registered to vote in the Central to go out there and cast their votes for APGA. We need to encourage Ohamadike by voting overwhelmingly for APGA better than any previous elections. We need to encourage him absolutely with our votes, we need to raise his confidence as he walks into the Senate recognising that his mandate is the mandate of Ndigbo all round and not some of us.

Voting for Ohamadike with overwhelming majority is the only duty that we ask of Anambra Central, Ndi Central MUST NOT disappoint.

Let us play our role and leave the rest to him, being a people of God, we shall be on our way back to our original factory fitted position.

I am sure Ndigbo know their son and Ohamadike, courageous, fearless and bold will open a new page that we all shall be proud of.