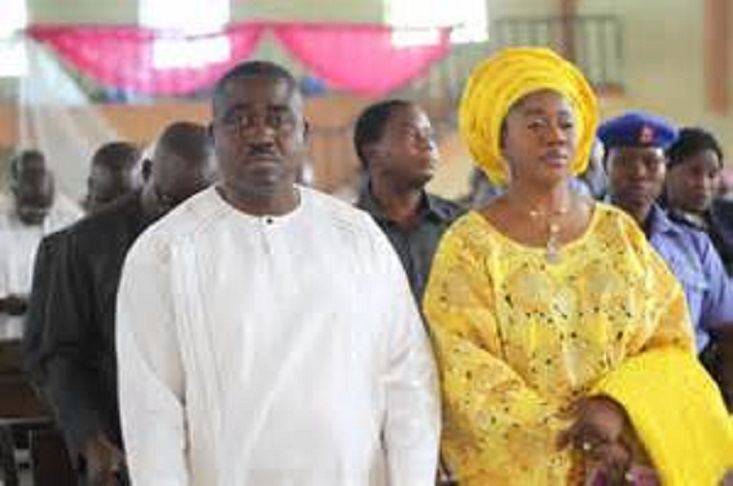 …Abuja traders accuse her of extorting money over shops allocation

Barely one week after being quizzed for over nine hours by the Economic and Financial Crimes Commission (EFCC) for alleged misappropriation of State funds while he was in office, a contingent of fierce-looking police officers from the FCT Police Command on Saturday saved his wife, Mrs. Yemisi Suswam, from mob attack.

Aggrieved traders had taken to the streets to protest alleged extortion and continued denial of access to their shops at the Wuye Ultra Modern Market.

They market was developed by All Purpose  Shelter Development Company, a firm owned having links with Mrs. Suswam and in which she is said to be the major financier..

She was inside the multi-billionaire market under construction, when the protesters arrived.

The former  Benue State First Land, who was held hostage for some hours in the market by the traders who accused her of conniving with  the authorities of the Federal Capital Development Authority (FCDA) of not only extorting money from them but also  denying them access to the shops they have since paid  for.

He therefore asked the FCDA authorities to give tell them the statutory fee, so that they can pay and move into their shops to start  their businesses.

The protest, according to him, was informed by an order of an Abuja High Court, which had asked the FCDA to declare the statutory  fees for the shops but which the latter  had not obeyed.

“Somebody somewhere who  believes  that  he or she is above  the law is now using the police to stop  the traders  from doing their  businesses. This  is why  we are protesting, we  are not happy and we  will  not  continue  to wait to be accepting  all these  intimidation.

“The intimidation  is too  much and I don’t  know the type  of country  we  are that the police  who supposed  to be adhering  to the law of the land  is going  against  the law. So, we are not happy with  the conduct  of the Nigeria  police  today.

“We have gone to the FCDA  and they did not say that  we have no allocation here, they  did not say we did  not pay  for allocation of shops  here even though we are hearing rumour here now that  FCDA  said that  we  did not pay anything. It is not  true, we are telling them here that ‘give us the  statutory fee so that we pay and continue  our businesses.’

“The court has even told the FCDA  that ‘give  these  people the statutory  feels so that they can pay and they are not ready to do  it.” We  have so far  paid  what  is required  of us but we are talking of the statutory  fees now.

“This is the FCT Area Command  of the Nigeria Police that is deployed here  and being led by the area commander. Mrs  Suswan, the wife of the former governor  of Benue  State is inside  there. She is instrumental  to what is happening  here. She said that she use her money  to construct  the market  and so,  wants to get here money back.”

In his reaction, Lekan Ogunleye, the Secretary/Legal Adviser to All Purpose Shelter  Development (Mrs. Suswam’s firm) that developed the market, said the traders had not been given a location because they were not ready to pay some money requires  of them.

He said, “In 2002, government advertised for the  construction of four  markets in Abuja, which were in Garki, Kaura, Wuye  and Mabuchi  and All Purpose Shelter  Development  won the contract  for  the construction  of Wuye Market.

“They took  loan  from  bank  to build the Wuye  market. The same government gave the developer a list  of 5,605 traders that can benefit  from  this  market.

“Meanwhile, the  total number  of shops in this market  is just 1,600 shops and people  have been  paying  the developer  since 2007 for these shops with the same Federal Capital  Development Authority papers.

“But the problem that  now  arose was  that the court went ahead to also say that they have the right to use and  enjoy the shop. However, we,  the developer  are now of the opinion that  there  are  certain conditions that would  make ‘you enjoy that right’ , we  are not  denying that they don’t have right  but  there  are certain things that they  need  to  do to  enjoy the  shops  just like any other person who  carries the same FCDA papers have done.

“But they are here now  saying no, we are not going to do anything. What I expect  their lawyer  to do is to advise  them that they  should  go back  to  that  court  and say  “the shop you gave  us, these  people are denying  us, take the developer  for contempt  of court”  so that the court  can make further  order and say go and use it without further  payment or pay  before  you  use.

“For us as a company to achieve that, we have filed paper  in court  for the court to say so. And the case is coming up on the 10th of December but the way the whole thing  is  going, we  are looking  at  a situation  where  it can come up  earlier.

“Since last week, FCDA have advertised in so many  newspapers  that they should go and meet  the developer to tell  them  how  much  to pay. I have personally  written  letter  to their  lawyer  that  this  is what you are  going  to  pay but he has not replied  me only for  them to come up with this  protest.”