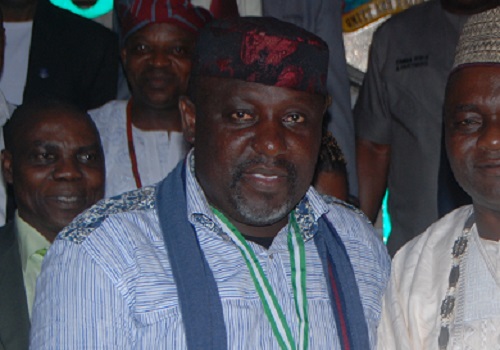 Speaking to the press yesterday in a swift reaction to Okorocha’s threat to deal with INEC and security officials for allegedly aiding the massive defeat of the All Progressives Congress (APC) in the presidential and national assembly elections, Ihedioha said the governor should be held responsible if violence breaks out in the state in the April 11 elections.

Describing the governor’s remarks as unfortunate and completely unbecoming of the Chief Executive of a state, the PDP governorship candidate said Okorocha’s stance is clearly against the principle and spirit of the peace accord signed by his party with other contestants in the general elections and that nothing would save him from defeat as the people of Imo State have roundly rejected him.

He said: “Okorocha continuously threatened all the officials that conducted the elections and their families. Security agencies were not left out. He incited Imo people to commit violence against them. He insinuated that he will visit them with violence- just for doing there duties and refusing to dance to his tune. Their lives are in his hands and if anything happens to any of the officials the blame will squarely be on him. From Governor Okorocha’s distasteful address and conduct today, Imo people can now understand why he refused to subscribe to and participate in several peace meetings and the eventual peace accord entered into by contestants in Imo State. Now Ndi Imo Know who to hold responsible if violence erupts in the state on account of the April 11 elections.”

According to Ihedioha, the election in Imo State last Saturday was a referendum on the “abysmal failure of the administration of Chief Rochas Okorocha.  The people of Imo State roundly rejected him for the hardships, unprecedented bad governance, unbridled appetite for aggrandizement of public resources, deceit and falsehood that has become the hallmark of his Administration. The people of Imo State are fed up with the antics of the State Government and the lawlessness that pervades the land.

“By attacking the Security Agencies, Chief Okorocha has shown his hands clearly as an accomplice to the violence and mayhem that was attempted on the people of Imo State. How could he publicly defend his aides that were caught red handed and paraded by the police with all sorts of arms and dangerous Weapons? The Governor should know that his immunity will soon expire and he will account for all misdeeds visited on the people of Imo State. He should know that the law is no respecter of persons and the long hands of the law can extend up to the International Criminal Court, ICC. Leaders, elders and senior citizens of Imo state and the generality of Nigerians are called upon to take note of Okorocha’s threat to unleash mayhem on innocent Imolites.

The victory of Muhammadu Buhari of APC is not Rochas Okorocha’s victory. It was achieved in spite of him. He is gloating and happy to have sabotaged the Igbo nation but Imo people are watching him and will definitely pay him back on April 11, 2015.  The election of Imo State governor is an affair concerning Imo citizens only, and I have no doubt where they stand.”