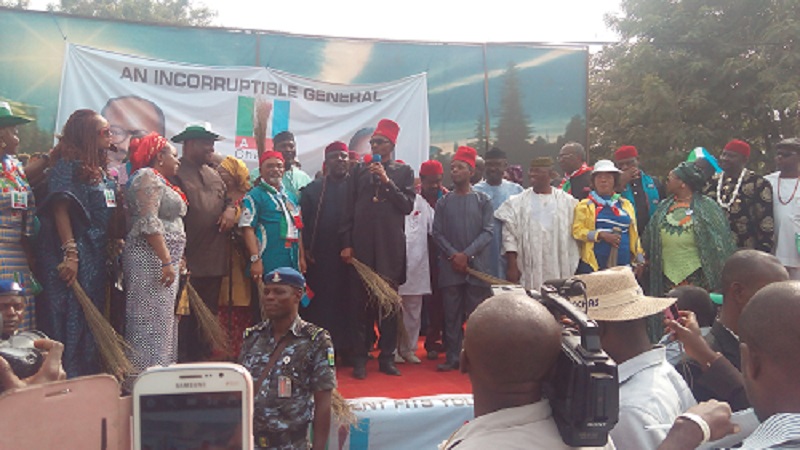 Awka the Anambra State capital was on Saturday 10 January, 2015 thrown into joyous mood as over 80,000 All Progressives Congress ( APC), supporters turn out en-masse to  welcome the former military Head of State Gen.Mohammadu Buhari and APC presidential candidate.

Addressing the mammoth crowd at the Emmause House Awka Gen. Buhari told the people that it was time to address the two fundamental problems confronting the nation for so long a time .

He said the country was currently battling with insecurity and acute unemployment adding that if the incumbent federal government was serious it would equally stop anarchy in the North-east as well as other troubled sections of the country .

According to the ex-military president , the APC will secure the country and also ensure that all the institutions become functional and effective once again .He emphasized that the power sector and all other sectors needed to be functional in order to create jobs for all and sundry stressing that APC will put the structure on ground for the nation’s economy to thrive .

Also ex-Governor Chris Ngige who is the incumbent senator representing Anambra-Central senatorial zone at
the National Assembly said the occasion was a presidential campaign visit to Anambra State . Dr.Ngige said that the platform was to market APC’s presidential flagbearer Gen.Mohammadu Buhari noting that APC will entrench good governance in Anambra and Nigeria in general .

He therefore decried the fact that the Peoples Democratic Party has not fulfilled its election promises to Nigerians as evident in the deplorable conditions of Enugu -Umuahia-Aba-Port Harcourt roads, oji river power and a host of other failed federal projects across the country .While admonishing the people of Anambra to obtain their PVCs and cast their votes for the APC and guard it jealously on the election day .

On the other hand , Imo State Governor Oweĺle Rochas Okorocha while addressing the large crowd noted that Nigeria could not boast of an economy with practical realities even with  the nation has oil and gas .Rochas maintained that APC was coming with a change to better the lives of Nigerians .

The Imo State Governor was of the opinion that the Anambra people and indeed the entire South-east should support Gen.Buhari’s presidential aspiration by voting massively for him as he was poised to put an end to corruption and corrupt practices in Nigeria .

Earlier in a remark, the state party chairman of the All Progressives Congress in Anambra Barr.Emeka Dennison Ibeh, said over 80, 000 party faithful were mobilized for the presidential visit to the state and he was not suprised with the large turn – out.

Barr.Ibeh however noted that the APC was coming with an agenda to change the status quo in the nation’s economy as he described the nation’s economy under the incumbent federal government as corruption-ridden .He pointed out that Nigeria was in dire need of an individual with the clout and charisma to fight corruption to a halt .

In an interview, the APC federal House of Representatives flag-bearer for Orumba North /South federal constituency, Hon. Barr. Uchenna Okonkwo – Okom told 247ureports.com that the reason why he left All Progressives Grand Alliance (APGA) for APC was for party inability to produce its own presidential candidate describing the adoption of president Goodluck Jonathan by the party as catastrophical.

Hon. Okonkwo – Okom said immediately it was gathered that Buhari emerged the candidate of APC, he had no option than to leave APGA for APC adding that Gen. Buhari zero tolerance to corruption informed his decision to defect to APC even as he said president Goodluck Jonathan was not in any way a match for Buhari

He accused president Goodluck Jonathan of jeopardizing the chances of the people of the South -East Geo political zone from becoming the president noting that what was agreed in 1999 was that South would go for 8 years and the North for another 8 years and that if president Goodluck Jonathan should be allowed to continue it would further block every possible way of Ndi-Igbo producing a president.

Speaking on his federal House of Representatives ambition, the legal luminary, prayed the people of Orumba-North and South to obey that agreement reached in 2006 by the two local governments that after the tenure of Hon. Ben Nwankwo it would be the turn of Orumba-North.

He noted that it was only APC party that withheld that peculiar decision reached 2006 and re- assured his teeming supporters of landslind victory.

He said that paraventure Gen.Buhari won the presidential election , he would tackle corruption head-on , create jobs as well as fulfill the promises the PDP could not fulfill to Nigerians .

Barr. Uchenna observed that the federal road in Anambra from Onitsha enroute Enugu was in bad  shape , that the promise of the Second Niger-Bridge  has not been fulfilled to mention a few .He said Nigerians crave for a positive change which he noted can only come through Gen . Buhari as he said that the ex-military president has the courage and temerity to fight corruption to make Nigeria better again .

Other dignitaries who spoke on the strength of APC in the forthcoming general election included Chief Ogbonnaya Onu ;Rt.Hon.Forth Dike , Hon.Emeke Nwogbo; Hon.Victor Afam Ogene and numerous others .