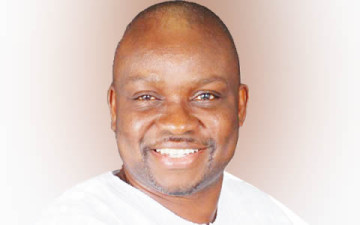 Ekiti State Governor, Mr Ayodele Fayose has counseled the All Progressives Congress (APC) in the State to bring back the party’s runaway lawmakers to the State, saying; “No individual, group or political party can hold the State to ransom.”

Reacting to the party’s condemnation of Governor Fayose’s presentation of the 2015 Budget to the House of Assembly today, Special Assistant to the governor on Public Communications and New Media, Lere Olayinka said, “it is shameful and wicked for the APC and its leaders to think that they can hold the entire people of Ekiti down just because they lost power.”

Olayinka, who warned  the APC lawmakers of the consequences of losing their seats should they continue to abdicate their legislative duties, added that; “by the rule of the House of Assembly, each member must attend the House sittings for 168 days in a year.”

He said the sitting of the House in which the 2015 Budget was presented today was lawful, adding that; “The court of law is there for the loudmouth in the APC to approach if they have any genuine complain to make.”

The governor’s aide said; “Today is December 15 and the APC lawmakers know that 2015 Budget must be presented as provided by the 1999 Constitution. Yet, some of the APC lawmakers refused to report in the House of Assembly, except three of them, who are interested in the progress and development of the State.

“The reality is that we are not in the Ekiti of 2007 where the APC (then ACN) lawmakers made presentation of the 2008 Budget by the then Governor, Engr Segun Oni almost impossible.

“The business of government in Ekiti State will not wait for the APC and their retrogressive lawmakers, and the party leaders must know this and advise the former Speaker, Adewale Omirin and his runaway lawmakers to return to Ekiti.”