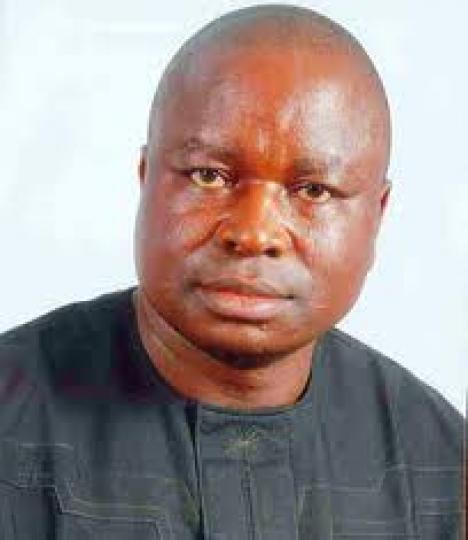 An Enugu State High Court has granted and Ex-parte Order restraining a gubernatorial aspirant on the platform of the Peoples Democratic Party, PDP, Senator Ayogu Eze from parading himself as the governorship candidate of the party pending the hearing and determination of a case filed by the Plaintiff and the PDP governorship candidate for Enugu State, Hon. Ifeanyi Ugwuanyi.
It also restrained the PDP from recognising or submitting the name of any other person other than Hon. Ifeanyi Ugwuanyi as the party’s gubernatorial candidate in Enugu State for the February 2015 general elections.
The order was issued by Justice R. O Odogwu in Suit No. E/499/2014 with Senator Ayogu Eze and the PDP as the first and second Defendants, respectively.
The order granted upon hearing the submissions of Ogochukwu Onyekwuluje Esq. with Tochukwu Maduka Esq. Counsel for the Plantiff, reads:
“The 1st Defendant/Respondent (Senator Ayogu Eze) by himself, his principals, agents, supporters or any other person howsoever called is hereby restrained from holding himself out and/or parading himself and/or allowing himself to be held out and/paraded as the gubernatorial candidate of the 2ndDefendant for the February 2015 general election in Enugu State pending the determination of the Motion on Notice already filed in this suit/

Loading ...
“The 2nd Defendant/Respondent is hereby restrained from recognising or accepting the 1stDefendant as the person elected at the said gubernatorial primary election conducted by the 2ndDefendant in Enugu State on 8th December 2014, and/or the gubernatorial candidate of the 2ndDefendant for the February 2015 general elections in Enugu State or forwarding the name of the 1stDefendant to the Independent National Electoral Commission as the gubernatorial candidate of the 2nd Defendant for the February 2015 general election in Enugu State pending the hearing and determination of the Motion on Notice already filed in the suit”.
The court adjourned till December 15, 2014 for the hearing of the Motion on Notice.
It would be recalled that Senator Ayogu Eze had in a statement issued on Tuesday, November 9, 2014, after the PDP governorship primary election claimed he was the duly elected candidate of the PDP.
However, the Enugu State Chapter of the party had in a swift reaction on Wednesday, November 10, 2014 denounced his claim, insisting that only one gubernatorial primary election held in Enugu last Monday with Hon. Ugwuanyi as the duly elected candidate.
In a statement issued by the State Publicity Secretary, Dr. Okey Eze, the party said: “The PDP Governorship Primary Election Panel from Abuja headed by King Asara Asara duly conducted the election with the official delegates list, ballot papers, and result sheets all obtained from the party headquarters and announced a result declaring Hon. Ifeanyi Ugwuanyi as the victor, he having obtained a total of 937 votes out of the 983 votes cast.   Hon. Ugwuanyi was therefore issued with a certificate of return.
“The PDP has an established procedure for electing gubernatorial candidates and has followed it religiously and methodically to a conclusive end, with Hon. Ifeanyi Ugwuanyi emerging as its candidate for Enugu State. The state Chapter of the PDP, therefore, calls on its faithful and members of the public to discountenance and treat as fallacious any information or posturing to the contrary”.
The Enugu PDP said the hotel where the Senator claimed to have been elected in another congress conducted by another set of delegates was not the official venue for the primary election, hence the absence of the PDP National Panel, the State party executives, and the INEC at the purported primary.
The party queried: “Since the bodies authorized by the party, the 1999 Constitution, and the Electoral Act 2010 to organise/supervise/observe primary elections were all absent, which ballot papers, result sheets, and certificate of return did Senator Ayogu Eze use?
“Senator Eze also admitted that it was the delegates who were supposed to vote at the primary election that conducted his purported primary election.  Who certified and accredited the delegates? Do our laws, party constitution and guidelines for primary elections permit aspirants to just assemble a handful of rented passers-by to assume both the roles of delegates, election organisers, returning officers, INEC, etc. and declare themselves winners?”