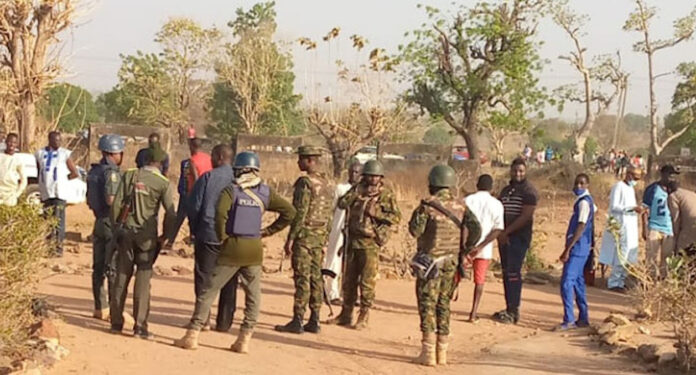 The Senate has called on President Muhammadu Buhari, to as a matter of urgency, declare a state of emergency on insecurity in the country.

This was just as the Upper Chamber condemned in very strong terms, Wednesday’s abduction of students and teachers of Government Science School, Kagara, Niger State, by bandits.

These were resolutions reached by the Senate following consideration of a motion, “Abduction of Students and Teachers of Government Science School Kagara: Need for urgent action.”

Earlier,sponsor of the motion, Senator Mohammed Sani Musa (APC, Niger East), while coming under Order 42 and 52 of the Senate Standing Rules, “notes with sadness, and great concern, the recent terrorist attack and abduction of students at Government Science School, Kagara, Niger State by gunmen in the early hours of today;

“Further notes that the bandits were dressed in military uniforms when they attacked the boarding school, overpowered the security guards before whisking away the students, and killing some which numbers are to yet to be confirmed;

“Aware that the exact number of students kidnapped are not yet known as headcount was being conducted in the school as we speak to ascertain the actual number of missing students; but the school has a population of over 1000 students

“Further aware that the security agencies were able to detect the coordinates of the area the students were taken to, and have started tracing the bandits’ movement while security aircraft have been seen hovering in the air to track the location of the students;

“Aware that section 14 (2) (b) of the Constitution of the Federal Republic of Nigeria, as amended stipulates that the welfare and security of citizens shall be the primary responsibility of government; thus government at all levels owe the people the duty to provide adequate security;

“Concerned that like the other incidents of school children abduction that took place in Chibok and Dapchi, several years back, if no immediate action is taken to rescue Kagara School Students, their fate may be sealed in the hands of terrorists; and

“Further worried that Niger, Katsina and many other states in North-west And North-central Nigeria are now bedeviled by Bandits attacks. The bandits Kill and kidnap at will despite the large deployment of police officers and soldiers to the affected states;

“Notes also on Sunday, 14th February 2021, many commuters and passengers numbering 57 were abducted in Kundu, all within the same area and yet to be released.”

Accordingly, the Senate in its resolutions, while condemning the attack on the Government Science School, Kagara, urged President Buhari to immediately declare a state of emergency on insecurity in the country.

The Upper Chamber also urged the President to consider and implement the recommendations of the Senate Ad-Hoc Committee on Nigeria’s Security Challenges dated March, 17th 2020 and Senate Resolutions therefrom, as a holistic response to the mounting security challenges across the country.

The Senate President, Ahmad Lawan, in his remarks, underscored the need for the military and security agencies to work in collaboration with the various state governments towards securing schools situated in the northern part of Nigeria were abduction remains predominant.

His words: “I believe that there is need for something new; a different initiative on especially how to protect our schools. And, let me be a little bit clear about the incident of abducting students from schools.

“Almost all incidents of abducting students from schools happen in northern Nigeria, and we all know how much efforts our leaders of yesterday, probably right from independence, worked so hard to ensure that children go to school in northern part of Nigeria.

“With incidents like this, we will be reversing all the gains that were made in convincing parents and wards to take their children to school.

“So, there’s need for our security agencies and government to ensure that we come up with a strategy of ensuring security in schools, because with this spate of kidnapping or abductions, definitely there’ll be that negative adverse effect on the desire and willingness of parents to allow their children to go to schools.

“And, the consequences of not going to school are better imagined in 21st century Nigeria or 21st century world.

“So, the Service Chiefs-designate have their work and take clearly cut for them. Part of what they are supposed to carry on board is how to secure our schools in addition to so many other challenges that they have to deal with.

“With that, the whole country will be praying and waiting for our abducted children to be returned back to their parents secured and well”, Lawan said.