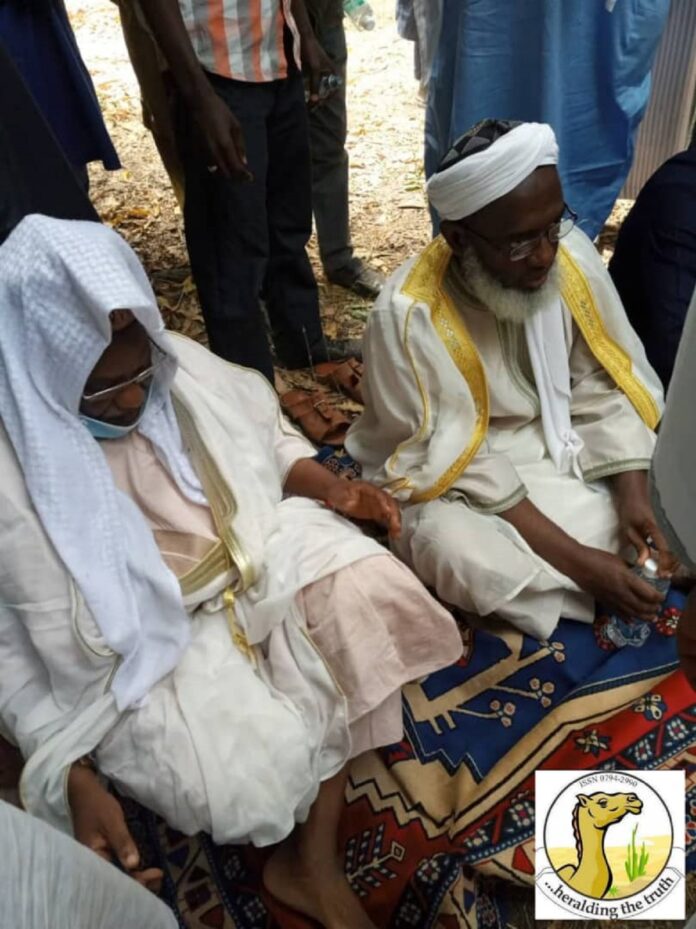 *…Bandits Took Gumi To Where a Whole Community Was Razed by Military Bombardments, Corpses Dumped In Wells*

In continuation of his efforts to take the message of Islam to armed Fulani bandits and to explore dialogue as the only means of addressing the uprising associated with killings and kidnappings, Sheikh Dr. Ahmad Abubakar Mahmud Gumi has accepted the invitation of Governor Abubakar Sani Bello of Niger State.

The invitation coincidentally came at a time when double tragedy has befallen the state; first with the abduction of over 30 passengers in a bus belonging to the state transport service and the latest kidnapping of school children and their teachers in Kagara. Niger State has suffered most worst bandits attacks in the last three years.

On arrival at the state capital, Sheikh Gumi had gone into a close-door meeting with his host, Governor Bello. DESERT HERALD reports that during the brief meeting on Wednesday, Sheikh Gumi had emphasized to the Governor the importance of dialogue especially in a society where government did not have the capacity to fully protect lives and properties from incessant attacks. He advised Governor Bello to use part of the money his government is spending on security to address some of the major concerns and grievances of the Fulani herdsmen. Governor Bello had thank Sheikh Gumi for the visit and for his endless sacrifices across the country. He said having tried the military option alone without commensurate success, he is now convinced more than ever before that dialogue and teaching the armed Fulanis about their religion and integrating them into the society as the Sheikh always admonishes government is the only way to address rampant cases of insecurity particularly in his state. Governor Bello told Gumi that his administration is ready for constructive engagement and dialogue with the armed Fulanis and acknowledged that over the years Fulani herdsmen were forgotten by governments at all levels and that there has never been any provision in previous budgets for their welfare in the past. Both Gumi and Governor Governor Bello are in total agreement that given out ransom to the rampaging herdsmen is not the option and that government will resist it and that instead provision of basic amenities like schools, water for human and animal consumption, clinics and job creation will be prioritised for them.

The National Security Adviser, NSA, Gen. Babagana Monguno, IGP Mohammed Adamu, Minister of Interior, Rauf Aregbesola and that of Information, Lai Mohammed also joined the meeting with Sheikh Gumi at the Government House Minna on Wednesday. The federal cabinet members were at Minna to coordinate efforts in rescuing the kidnapped victims on the orders of President Muhammadu Buhari. Also in the entourage of Sheikh Gumi that attended the meeting includes Prof. Usman Yusuf, DESERT HERALD Publisher, Mallam Tukur Mamu, Chief Imam of Sultan Bello Mosque, Sheikh Muhammad Suleiman Adam and one of the leaders of Meyetti Allah, Shehu Buba.

Gumi’s team had on Wednesday proceeded to Kontagora where they spent the night and proceeded to Kotonkoro on Thursday morning. Because of the bad road, the journey to Kotonkoro took Sheikh Gumi about 5 hours. The purpose of the difficult journey to Kotonkoro is to visit the dreaded Dutsen Magaji forest where the Sheikh has work tirelessly to secure a scheduled appointment with top commanders of the Fulani bandits that are terrorising Niger State and some parts of Kaduna precisely the notorious Birnin Gwari area. Before his departure to Kontagora, Governor Abubakar Sani Bello has instructed his Secretary to the State Government, SSG, whose office is also in-charge of security in the state to follow Sheikh Gumi wherever he will go. The Governor who has demonstrated determination to end kidnappings and armed banditry in his state assured Sheikh Gumi that whatever recommendation that comes out of his engagement with the bandits as long as it is for their welfare and full integration back to the society his government will support and mobilize resources towards actualising it.

The journey from Kotonkoro to Dutsen Magaji forest is about 50 kilometers and without any provision for road network. It took Sheikh Gumi, the SSG and members of the entourage another two hours before reaching the deadly forest. The highly armed bandits under the leadership of Dogo Gide have strategically positioned themselves at the forest in case of any eventuality. Their faces and appearance demonstrate no mercy and easily sends fear.

Gumi’s peace and preaching mission at Dutsen Magaji forest is so far the most successful considering how volatile the area is and consistency of attacks. During the preaching session, each of the bandits commanders were given the chance by Gumi to address the crowd. They separately narrated their ordeal, their frustrations and why they resorted to banditry. They said they only accepted the invitation because they were told it was Sheikh Gumi. Their overall leader, Dogo Gide and other top commanders (Kachallas) were captured by DESERT  HERALD through video and audio during separate briefings at the forest. DESERT HERALD is the only news medium that covers the difficult and risky journey to Dutsen Magaji forest. The coverage was done undercover as the top commanders have warned against taking pictures or video.

The top bandits commander, Dogo Gide during his speech had lambasted Governor Nasir El-Rufai for his stand against dialogue and threatened the people of Kaduna state but Sheikh Gumi was quick to interrupt and assured him that all the governors of the North West are now in agreement that the Fulani herdsmen have been forgotten by governments for many years and that they will henceforth work towards giving the herdsmen special attention.

The SSG of Niger State had also delivered the message of Governor Bello to them and assured them about his government’s sincerity and commitment to address their concerns and grievances. He took note of their demands and grievances and promised to convey same to Governor Bello as soon as he arrives Minna for immediate consideration while Sheikh Gumi on his part will monitor progress of implementation before the federal government steps in.

On his part, Sheikh Gumi took time to preach to them about forgiveness, peace and dialogue in Islam. He told them that in Islam there is no justification at all for reprisal attacks, killings, kidnappings and rape. He admonished them about alcohol and drug consumption or taking the laws into their own hands. He assured them that he will not deceive them and urged them not to disappoint him. Sheikh Gumi specifically pleaded with the armed Fulani bandits to immediately release all those they abducted particularly the recent kidnappings that made newspaper headlines across the country. He assured them he will do whatever it takes to convince the president and the National Assembly to create a Commission for the herdsmen that will work towards addressing imbalances and injustice done to the Fulanis. He encourages them to always seek for Islamic knowledge and to be consistent in their 5 daily prayers. Gumi had distributed Islamic books them and hundreds of wrappers for their wives. The items were contributed by the foundation under him.

Apparently satisfied with the sincerity of Sheikh Gumi, leader of the bandits, Dogo Gide has assured him that he will not be disappointed and that on their part they will do everything possible to maintain the peace and give reasonable time pending when they are convinced about what government will do. They complained of what they called excesses of local vigilantes popularly called Yan Sa Kai and how according to them they have been killing innocent Fulanis and warned that if Fulanis are not allowed to move freely without threat and molestation there won’t be end to banditry and kidnappings in the entire north. They took Sheikh Gumi to a settlement of about 1500 people and lamented how military bombardments destroyed the entire community, razed all the houses, killed and dumped bodies of the inhabitants in about three wells. The exclusive pictures and images of the those that were killed and dumped in the wells were taken by DESERT HERALD. They said the military are just targeting women, children and their animals during bombardments and that as a result of that many innocent lives were lost.

The bandits can be seen much more relaxed and very willing for engagement before the end of the preaching session. From interactions with them, DESERT HERALD understands that most of them are tired living in a jungle life, a life of exclusivity and lack of freedom. What most of them said they are missing much is the freedom to freely move around towns, market and to attend to their traditional and social events. One of them told DESERT HERALD on condition of anonymity that he has spent 3 years in the bush without seeing his mother and that he is willing to go back to his family but is afraid due to uncertainty and how some of them were slaughtered by Yan Sa Kai and soldiers.

The most interesting and fulfilling part of Sheikh Gumi’s engagement and preaching session with the bandits is when the top commander, Dogo Gide promised Gumi that all those that were kidnapped either directly by his people or those he has influenced to talk to will soon be released. It is expected that the Kagara school boys, their teachers and other passengers that were abducted in the state owned passenger bus will be release any moment from now.

Exclusive pictures and videos of Thursday’s visit has been attached to this report. Sheikh Gumi and his entourage had arrived Minna from Dutsen Magaji forest, a journey of more than 7 hours around 3am on Friday.