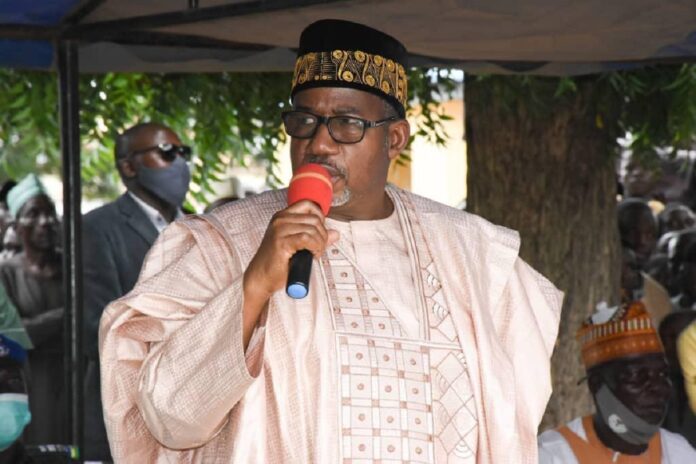 Bauchi State Government has reiterated its commitment to build additional 4000 houses in addition to the ongoing building 2500 as part the Governor Bala Mohammed commitment to address the problems of shelter roads and infrastructures in the state.

The Senior Special Assistant to Governor Bala Mohammed of Bauchi State on Project Monitoring, Alhaji Musa Ahmed Azare, stated this today Thursday in Bauchi when he visited the secretariat of the Nigeria Union of Journalist NUJ, He said ” that the Governor has in his effort to bridge the shortfall in housing, went out to source for housing project where he got a collaborative support from Family Homes to construct 2500 houses in strategic LGs of the state and additional 4000 housing project is coming, also in collaboration with Family Homes, noted that the abandoned BASG/World Bank water project in the State has gotten priority attention by the present administration.

the State Government in collaboration with World Bank has taken it up and is nearing completion and the project when completed will bring to total end, the acute water shortage being experienced in the State”

While reacting to critics that roads are not what the people of Bauchi need, Musa Azare said, “critics as you know are basic ingredients in a democracy, we love them. You see, you cannot stop critics from doing their criticisms, whether right or wrong.how ever the present administration cones ar a time when Bauchi State is hungry for infrastructural development such as good roads because there are several communities that normally get completely cut off from other parts of the State the moment it was rainy season, anyone saying that such communities doesn’t need roads is deceiving himself knowing fully that Bauchi is an agrarian state, as such, communities without roads needs intervention to have access roads for transporting their farm products”.

“We also have traders in our remote communities who always come to the local market with their commodities, without access roads, they can’t do that. The economy is driven by such people. How do you ignore their plights to have good access roads”.

Musa Azare said that “the present administration met a backlog of pensions and gratuity ? in the history of Bauchi State, no Governor has device ways to solve such issues like Bala Mohammed before now, you have to know somebody to access your gratuity after retirement.Somebody that retired ten years ago cannot get his benefits while somebody who retires just last week can bribe his way to get his benefit. But ugly trend has now banished, courtesy of the new order of decency and rule of law instituted by this administration”.

SSA project Monitoring lamented that the Bauchi state has been left behind  by Gombe State in the area of infrastructural development which , the present administration of Bala Mohammed is working tirelessly to close the gap.

He commented on the recent assertion by Governor Bala Mohammed that Gombe State is years ahead of Bauchi in the area of development said “Bauchi state is hungry of infrastructure. We are emaciated as far as infrastructure is concerned”.

“Gombe, thanks to their patriotism and the love for their State; they were lucky their successive leaders love the State, they have achieved tremendous successes in infrastructural development, it is sad that today we are comparing ourselves with a child we gave birth to”, he added.

Musa Azare who recalled that Gombe was created out of Bauchi, “is our child, we gave birth to Gombe but we are looking after Gombe; that we are today eulogizing them in terms of infrastructural development, is a sad story, unfortunately. But, I think we are lucky we have a patriotic leader at the helms of our affairs who wants to catch up not only with Gombe but States that are greater than Gombe in infrastructural development.”

“I think the pace and the speed at which we are going and the successes we are recording thus far, those 50 years could be reduced to four or eight years, we can catch up with them and I can assure you we will not slow down, we will only continue to hit the throttle fast hard enough until we get there.”

He said with the speed at which the Governor is driving the economy of the state, the infrastructural deficit that has bedeviled Bauchi will be closed within four to eight years.

“It is very difficult in our country like ours, and with the nature of our politics, for a governor to unseat someone and continue executing abandoned projects he met on ground”, he said.

Musa Azare  said that the narrative has been changed by Governor Bala Mohammed of Bauchi State due to his untiring effort to complete all abandoned projects he inherited from the past administration.

“You may recall that the past administration abandoned projects for reasons best known to them. I can tell you that in few years of Bala’s government, these projects are either completed or are nearing completion”, the SSA noted.

“For instance, in Bauchi metropolis, you have the CBN roundabout to federal lowcost/railway road, for which billions of naira had been spent but couldn’t be completed by the past administration, has today been completed by this government”.

He said that when the contract for the CBN roundabout to federal lowcost/ railway road was awarded by former Governor M A Abubakar in December 2015 he pledged to complete it within 18 months but couldn’t do so throughout his four years in office.

Some of the abandoned road projects that have been completed by Governor Bala according to Azare include; Udubo-Gamawa road, Sule Katagum road in Azare, which is about 95 percent completed.

“The Udubo-Gamawa Road has due to its abandonement, claimed lives, it has cost the life of my dear friend, former PRO of APC, Hon. Auwal Ali Jalla,” may his soul rest in peace.” There is also Sule Katagum road in Azare, as I said earlier, it was abandoned by the past administration and it is nearing completion today.

The project monitoring aide to the Governor said several other abandoned projects have been completed by Governor Bala Mohammed added that new ones such as the Burga to Alkaleri road have gone very far.