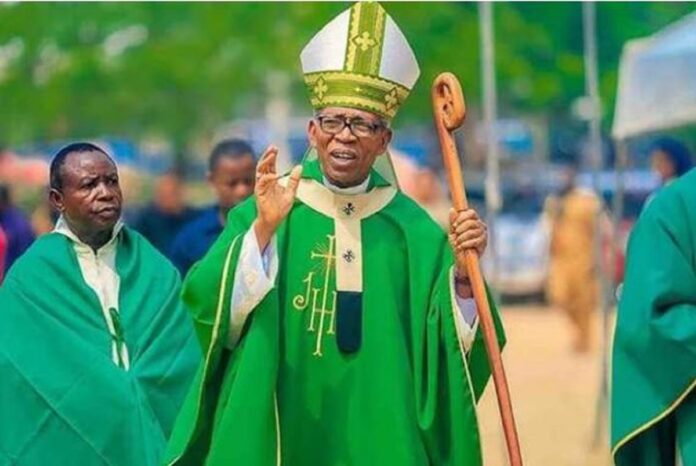 The Catholic Archbishop of Owerri, Most Rev. (Dr.) Anthony Obinna has commended Governor Hope Uzodimma of Imo State for his programmes that he said are pro-people despite the teething challenges the government faced in the early days of the administration.

It was an event where the governor took stock of Nigeria’s journey so far in the past 60 years of her independence, and concluded that the occasion affords Nigerians the opportunity to identify those areas they have not done very well and make efforts to correct and make the necessary amendments.

Governor Uzodimma acknowledged the damage done to Nigerian Democracy by the civil war and the military regimes which created atmosphere of dis-orientation and distorted the original plans of our founding fathers who got independence for the country.

Although the Governor observed that the Third Republic that started in 1999 may not have really done very well, but he maintained that with democracy still in vogue in Nigeria there is hope of positive things to come in future.

Governor Uzodimma said that if Nigeria is really independent, the people should recommit themselves to nationhood and patriotism by doing the right things that allow them achieve more for the nation.

He said that the worst form of democracy is better than the best form of military dictatorship, because “democracy enables the citizens to express their views and contribute their quota to the development of the country.”

Speaking on Imo, Governor Uzodmma assured that his administration will rectify the areas the political class in the past disappointed the people by improving on those things that were shadily done “and with the Grace of God, bring back happiness and sense of security to Imo people which have been an impediment to people’s plans to go about their businesses without fear of molestations.”

He promised to create an enabling environment that will “allow politicians do their politics, businessmen do their businesses and the Civil Servants do their job.”

The Governor who admonished the Civil Servants to desist from abetting crime and fraud in the Civil Service reiterated that he has the good intensions of restoring the past glory of the system by bringing back the dignity, pride and responsibilities of the civil service. He spoke about his plans not only to remodel the civil service infrastructure but also to restore the Code of Conduct that have been ignored overtime.

He reaffirmed his earlier position that he has come to serve and that he will do his best to restore people’s confidence in government, as “government will take responsibility by working assiduously to give them what will make them happy.”

In his homily earlier, the Archbishop Obinna enjoined Nigerian leaders to remember the joy and funfair that characterized the day of her Independence in 1960, and help Nigerians fill same once more.

Archbishop Obinna decried the state of insecurity in Nigeria today, the killings, banditry, kidnapping, Boko Haram, and regretted that at the time of Independence Nigeria was not so bad.

He acknowledged the efforts of Governor Uzodimma towards doing things right in Imo State, especially his policy of reconstruction, rehabilitation and recovery and assured him of the fervent prayers of the Catholic Church to enable him succeed. He however appealed to the governor not to derail from his vision and disappoint Imo people.

The Church Service was attended by many distinguished dignitaries of Imo origin and beyond, including heads of all military and paramilitary agencies operating in Imo State.

Prominent among those in attendance were the wife of Imo State Governor, Barr. Chioma Uzodimma, the Deputy Governor Prof. Placid Njoku and the Wife, the Speaker Imo State House of Assembly, Rt. Hon. Dr. Chiji Collins and his wife, the Secretary to the Government of Imo State, Chief Cosmas Iwu and his wife, and the Head of Service, Dr. Chibuzor Iwuagwu.

The governor later held an Independence lunch for the dignitaries who joined him at the church service where a toast was proposed for Nigeria and another one for Imo State.