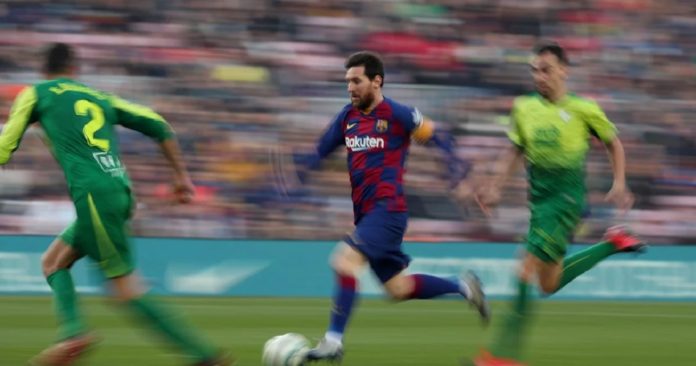 FC Barcelona captain Lionel Messi was in a prolific mood as his side crushed Eibar 5-0 at home in La Liga on Saturday.

He scored four goals to placate supporters who began the game by showing their discontent with club president Josep Maria Bartomeu.

The win took Barca back to the top of La Liga on 55 points, two ahead of Real Madrid who visited Levante later on Saturday.

It also gave them a boost ahead of their UEFA Champions League last 16 first leg tie at Napoli on Tuesday.

Messi had not scored in his previous four games but put the Spanish champions ahead in the 14th minute by dancing and barging his way past three players to slot home for the opener.

He doubled the lead in the 37th minute with an equally impressive strike before completing his treble moments later.

The Argentina captain netted late in the second half for his fourth goal before Arthur Melo completed the drubbing with a tap-in.

His goals cheered fans who began the match waving handkerchiefs and calling for Bartomeu to resign.

This was in the wake of the club being embroiled in a scandal involving a firm hired to monitor coverage of the team on social media.

Messi indicated he was unhappy with those who run Barca in an interview with newspaper Mundo Deportivo on Friday.

In the interview he had defended his recent outburst against sporting director Eric Abidal and said the team had faced “problem after problem”.

He had also questioned the strength of the FC Barcelona side, who he claimed were not strong enough at the moment to challenge for the UEFA Champions League.

Barca looked shaky in the early stages against Eibar and conceded a goal that was quickly ruled offside.

But they soon found their feet, led by Messi who was at his unplayable best.

After using a combination of strength and skill to score the first goal, he used his pace to dash past the Eibar defence down the left.

He then lashed the ball into the far bottom corner.

Later on, Messi looked to tee up Antoine Griezmann but the French forward lost control of the ball and the Argentine cleaned up by tapping in the third goal.

Barca eased off for most of the second half but Messi showed no mercy when he received a pass from Arthur inside the area.

He literally toyed with Eibar’s desperate defenders and goalkeeper Marko Dmitrovic before walking the ball into the net for his fourth.

New signing Martin Braithwaite came off the bench to make his Barca debut after an unexpected move from league strugglers Leganes.

The Denmark striker quickly made an impact by drilling a shot at Dmitrovic which Arthur buried on the rebound.